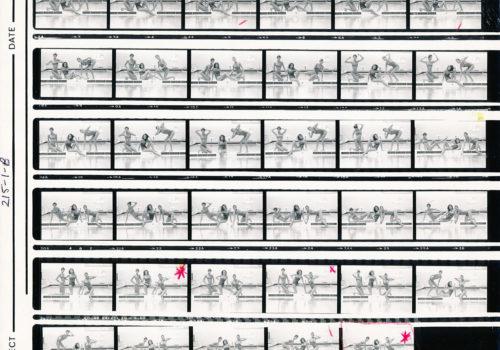 The Selects Gallery is releasing never-before-seen images and contact sheets by Robert Farber of supermodel Gia Carangi as part of its current exhibition: “Gia Marie Carangi : Known as Gia.” In celebration of Pride Month. The exhibition is being hosted in collaboration with Sandy Linter, makeup artist, staple of the disco era, and love interest of Gia.

The simple name Gia evokes a number of headlines: the first supermodel, a dangerous flirtation with drugs, a lonely, misunderstood beautiful girl. She was also the first super model to be openly gay.

Stories of Gia often focus on tragedy: a meteoric rise to fame doomed from the start, a cautionary tale. Yet there is more complexity to Gia than such tales would suggest, something Sandy Linter has been advocating in her work to keep Gia and her legacy alive. Sandy knew the real Gia, the girl off-camera, the stories which didn’t make the tabloids. She has used her platform to remember Gia and to encourage those who worked with her to share their stories.

Seeing Gia through the lens of American photographer Robert Farber, known for his soft, painterly style is like discovering another side of the model. The artist shared with The Selects Gallery, “I photographed Gia, a beauty known by many… but I tried to capture the Gia who was known by few.” Farber worked with Gia on several photoshoots for Bloomingdale’s in 1979, the resulting images a rare glimpse of a different side of Gia.

While many are familiar with the iconic image of Gia on the lifeguard stand, the contact sheets from the same photoshoot shows the dynamism and vibrancy of Gia’s talent. In the final image, Gia sits on top of the lifeguard stand with impossible ease while holding a difficult pose. Farber has drawn out her strength in this image; while she is sexy, it is not in the same overt way in which she is usually captured. Instead, she is captivating, sexy in her boldness, holding the viewer’s gaze. In a full contact sheet beside the pool, subtle movements change Gia’s vibe. She shifts from bold to easy, strong to sexy. Behind Farber’s camera, hidden aspects of Gia’s personality and talent are drawn out.

In Farber’s images for Bloomingdale’s, the model shows many sides of herself. She is innocent and feminine on a church pew, girly and fun-loving with Debbie Dickinson, sporty by the pool, fierce on the lifeguard stand. Under Farber’s gaze, which is both investigative and artful, she found a space to let the mask down, giving us a glimpse into the Gia known by few.

The exhibition is on view at https://www.theselectsgallery.com/gia