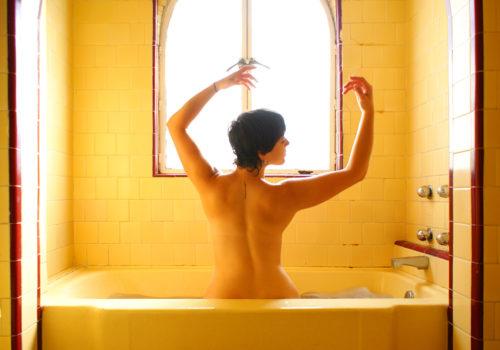 More than 500 women and women-identifying photographers from around the world responded to an open call by the RPS Women in Photography Group. A curated selection of 50 self-portraits can now be viewed in an online exhibition.

SELFIES celebrates the current take on a classical form of artistic expression, with the winning entries announced on social media and presented in digital form in keeping with the most visible modern iteration of the genre.

Best of Show: Jekyll and Hyde by Frankie MacEachen (UK)
Best B&W SELFIE: Do I Sit Well by Dee Robinson (UK)
Best International SELFIE: Reflections by Aljohara Jeje (Jeddah, Saudi Arabia)
Judges Gold to Eloisa Sanchez (Mexico) as the only photographer with both submitted images selected for the exhibition

The exhibition reflects the great diversity within self-portraiture, traditionally driven by personal salvation, self-scrutiny or vanity; while feminist artists in particular have used the human body to express facets of identity such as gender, sexuality, race or ethnicity. With artists increasingly turning the camera on themselves during lockdown, the presentation provides an intimate snap shot of self-representation.

The Women in Photography Group is a special interest group with the objective of facilitating the celebration, education and collaboration of female and femaleidentifying photographers and is available to members of the Royal Photographic Society. The SELFIES call was open to members and nonmembers, with the selection panel including photographer Amak Mahmoodian; Enter RPS Director of Development Tracy Marshall-Grant; Women in Photography Chair Teri Walker; and Laura Noble, curator and founder of LA Noble Gallery.

Frankie MacEachen (UK)
I first picked up my camera in 2016 after performing onstage for many years. As an actor, much of my preparation focused on stillness. Capturing the essence of a character and building a narrative from within.

In making the transition from one creative medium to another, this process became a driving force in my photography whether it was portraiture or landscape. I strived to get under the skin of my subject.

I was diagnosed with a mental health condition in 2019 at age 49. On a personal level the diagnosis finally gave me answers but it subsequently inspired me to dig deeper in my photography with an emphasis on putting ‘the inside on the outside’ so to speak and to convey a deeper story through a still image.

During lockdown, I had no option but to turn the camera on myself. I started to consider how light and shade could be utilised to capture different moods within one image. Moving forward I want to explore further the impact of managing the highs and lows of a mental health condition through the stillness of an image.

Dee Robinson (UK)
Usually faces have been a part of my pictures, now they are the main event.

I started out taking pictures of architecture, would even wait until people moved out of shot. This was a long time ago, maybe I got a little bored with bricks and mortar, maybe I needed actors for my stage of beautiful buildings but people started to appear and it started a fascination that grew slowly into a love of portraiture.

It was during the first lock down when as a group of photographers we couldn’t decide on a project to show for our next Zoom meeting and came up with the idea of selfies. Not being terribly keen on the idea of seeing myself on a screen I decided to hide behind another’s persona, in this case Dame Edith Sitwell and all her rings.

Aljohara Jeje (Jeddah, Saudi Arabia)
What is art without a message?

As long as I can remember I have been a woman and artist. Enraptured by techniques, I graduated in Product Design, after Art-Photography, in between propaedeutic in Art History, and later in life I took courses in medieval artistry techniques (in China and in Portugal). I raised my family in various countries and four years ago I restarted my career in the arts, slowly overcoming a 20+ years professional hiatus.

Enjoying Saudi Arabia’s vibrant society so much and convinced that its culture has all the elements to become the next artist’s hub on par with Berlin and the like, I closed my house in Europe indefinitely and choose to live and work here, as long as The Kingdom is willing to have me, of course.

Eloisa Sanchez (Mexico)
Eloisa is a Mexican professional photographer based in Mexico City. She holds a Bacherlor’s Degree in Architecture by the Universidad Autónoma de México (U.N.A.M.)  and a degree in Photography by the Escuela Activa de Fotografía.

Eloisa started taking pictures at an early age. Since she was born, her father always had a camera in his hands and at the age 6 he gave her her first own 110mm camera. Self-taught at the beginning, she grew up with photography as a hobby; but with time, and after graduating in Architecture, the idea of making photography her life consolidated in her head.

For some years she worked as a studio photography teacher while working on the field.