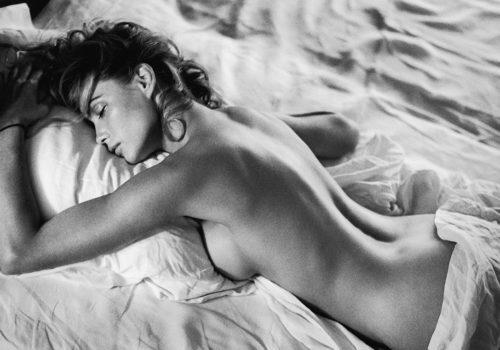 Sylvie Lancrenon : Knowing how to steal the moment.

Sylvie Lancrenon started her career as a photographer on movie sets. She studied with Claude Lelouch and Jean Becker, among others, with whom she learned how to set the stage for beauty and made it her artistic signature. The cinema, thereafter, will never cease to inspire her.

As a photographer of the intimate, she knows how to tame the mystery, prepares her shots as one prepares a film. She likes to photograph actors, as close as possible to their emotions. Her images are timeless and her eye is vibrant and accurate.
Sylvie Lancrenon is a great portraitist and no star can resist her. The most beautiful women in the world, but also some men have passed in front of her lens. From Isabelle Huppert to Emmanuelle Béart, from Vincent Cassel to Johnny Hallyday, from Laetitia Casta to Isabelle Adjani, from Guillaume Depardieu to Fabrice Lucchini, or from Charlotte Gainsbourg to Naomi Campbell, she has no equal when it comes to revealing her models.
She created memorable covers for the most prestigious magazines, but also signed major advertising campaigns.
Caught up by her passion for cinema, she directs short films whenever she can.
In 2021, her book “Ombres et Lumières” (Shadows and Lights), earned her a place for the national campaign for the inclusion of people with disabilities. A remarkable work, for which she has, for once, been able to capture this extra soul that invites to look beyond the difference.
An artistic approach that can be discovered with her new exhibition “Comme au Cinéma” at the Galerie Vellutini in Paris from December 15th 2022 to January 7th 2023.

Your first photographic trigger?
Sylvie Lancrenon: In boarding school at 14, I started to take portraits of my girlfriends! I photographed them all the time.

The man or woman of image who inspires you ?
Sylvie Lancrenon: Maryline Monroe.

The image that you would have liked to realize ?
Sylvie Lancrenon: I will realize it !

The one that made you angry ?
Sylvie Lancrenon: None.

A key image in your personal pantheon?
Sylvie Lancrenon: The busts of Rodin.

A photographic memory from your childhood?
Sylvie Lancrenon: Seeing my father filming with his little Sony.

The image that obsesses you ?
Sylvie Lancrenon: The next best one !

Without any budget limit, what would be the work you would dream of acquiring ?
Sylvie Lancrenon: A Picasso painting.

According to you, what is the necessary quality to be a good photographer?
Sylvie Lancrenon: To be patient.

The secret of the perfect image, if it exists?
Sylvie Lancrenon: Work,  searching relentlessly.

The person you would like to photograph ?
Sylvie Lancrenon: Elle Fanning in the Majoureau forest.

The camera of your childhood ?
Sylvie Lancrenon: A mini Kodak.

The one you use today ?
Sylvie Lancrenon: A film Nikon F3, a pocket Leica and a digital Nikon D850.

The best way to disconnect for you ?
Sylvie Lancrenon: Swimming in the sea, the ocean, a pool. Everywhere!

What is your relationship with image?
Sylvie Lancrenon: Perfection.

Your greatest quality?
Sylvie Lancrenon: Laughter, the joy of living.

Your latest folly ?
Sylvie Lancrenon: To launch two exhibitions at the same time!

The job you would not have liked to do?
Sylvie Lancrenon: Being in an open office space!

Your greatest professional extravagance?
Sylvie Lancrenon: Making Marie-Agnès Gillot dance in a dilapidated staircase, she was suspended in the air !

The city, the country or the culture you dream of discovering?
Sylvie Lancrenon: India and Namibia.

The place you never get tired of?
Sylvie Lancrenon: The sea.

Your biggest regret?
Sylvie Lancrenon: Not to have said yes to Johnny Hallyday to follow him during his motorcycle ride on Route 66, with all his friends.

Color or B&W?
Sylvie Lancrenon: Both, preferably Black and White.

What is, according to you, the most photogenic city ?
Sylvie Lancrenon: Venice.

If I could organize your ideal dinner, who would be at the table?
Sylvie Lancrenon: Picasso, Dali, Marylin and my friends of today!

The image that represents for you the current state of the world?
Sylvie Lancrenon: The mess, the disorder everywhere!

What is missing in today’s world?
Sylvie Lancrenon: Generosity and a kind look towards the Other.

If you had to start all over again?
Sylvie Lancrenon: I start over every day.

The word of the end ?
Sylvie Lancrenon: Clapperboard final.