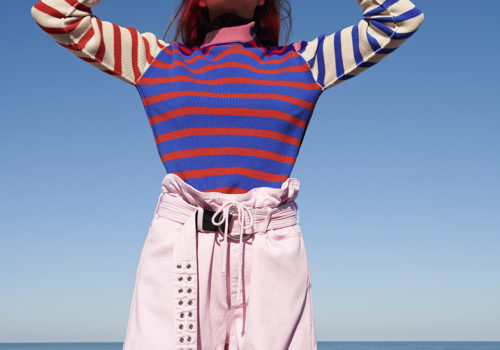 Daughter of the iconic photographer Jean-Loup Sieff and Barbara Rix-Sieff, Sonia inherited talent. A set photographer in her early days, she quickly fell in love with fashion and is obsessed with the bodies and personality of those who pass in front of her camera.

If she doubts everything, Sonia Sieff on the other hand never doubted her desire to become a photographer, it was obvious to her. However, she did not receive her first camera until the age of 17 … “A bit late for a photographer’s daughter” she admits, having fun! But whatever, very quickly her images are precise and intense, she learned how to use light. Like her father, she loves distinguished women, dancer’s bodies, composition and cinema. She admires him infinitely but follows her own path and imposes herself.

Curious about everything, she has always lived several lives. So, every now and then, she likes to go on the other side of the mirror, it amuses her because it is another energy.

Also a director in her spare time, she has shot many commercials, and promises us very soon her first documentary film dedicated to her father …

Someone worth keeping an eye on!

Sonia Sieff : a film badly inserted in the camera

Sonia Sieff : who do you think?

Sonia Sieff : The one that I will do tomorrow.

Sonia Sieff : Images taken from life. Elliott Erwitt the mother with her baby.

Sonia Sieff : All the bad images that flood our lives

Sonia Sieff : Knowing how to shoot at the right time.

Sonia Sieff : I wish my father had seen the journey accomplished.

Sonia Sieff : DayLight without any hesitation !

Sonia Sieff : I would put my camera down and bow down.