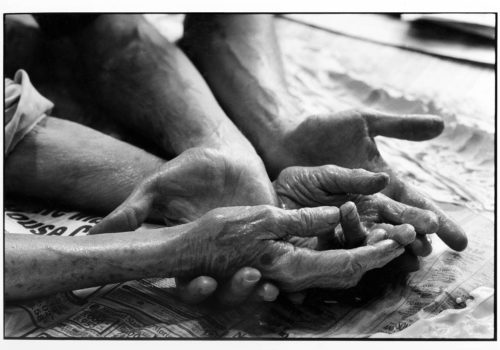 Art director on his own time, Jean-Francois Jaussaud is one of the most sought-after photographers in the field of life style, and his images are published in the biggest magazines from The World of Interiors, AD, ELLE and ELLE Decor, to T Times magazine, Vogue, Wallpaper, Marie Claire, or Harper’s Bazaar… in more than twenty countries.

Thanks to his experience and his numerous collaborations in fields as varied as art, design, fashion, architecture or decoration, the photographer has developed his activity in several fields in recent years. Editorial projects for high-end magazines, design of visuals, realization of books or personal research.

He also has several books to his credit including Louise Bourgeois Femme Maison published in 2019 by Albin Michel. He has also produced many private books for art collectors. His work has been exhibited in galleries since 2012.

It is on the occasion of his next exhibition at the Hangar that Jean-François Jaussaud lent himself to the game of our “Questionnaire”.

Carole Schmitz : Your first photographic trigger ?
Jean-François Jaussaud : My grandfather was passionate about photography, a great amateur, who mastered the shooting and the laboratory. I was always fascinated by his glass plate cameras and the whole process of creating an image. The click was on, and then it went off when I came across the great photographer Dominique Issermann. I was looking for a position as a photographer’s assistant, I knocked on the door of some of those I admired with my small portfolio: Helmut Newton, Paolo Roversi… All very nice, congratulating me and encouraging me to persevere. Only Dominique, with great frankness and accuracy, criticized my images, highlighting my lack of rigor and personal involvement!   The trigger … it’s with her that I worked during two wonderful years!

CS : The man of images who inspires you ?
Jean-François Jaussaud : Robert Frank.

CS : The image you would have liked to make?
Jean-François Jaussaud : The first known photo. The view of Nicephore Niepce’s Gras. For the idea of having succeeded in capturing and fixing the light!

CS : Which one moved you the most?
Jean-François Jaussaud : Robert Mapplethorpe, self portrait 1988, a moving self-portrait, where the photographer, knowing he was dying, his features hollowed out by illness, poses with a cane with a skull.

CS : And the one that made you angry?
Jean-François Jaussaud : Nick Hut’s photo of the little girl burned with napalm during the Vietnam war in 1972, unfortunately still relevant today.

CS : What is the necessary quality to be a good photographer?
Jean-François Jaussaud : To feel the light.

CS : The secret of the perfect image, if it exists?
Jean-François Jaussaud : It is a secret.

CS : The camera of your beginnings?
Jean-François Jaussaud : Instamatic Kodak.

CS : The one you use today?
Jean-François Jaussaud : Pinhole Box, Camera, Hasselblad 500, Polaroid 180, Nikon F3HP, Canon EOS 5DMark3 or no camera at all, I also like working with light alone. I like to experiment, it’s the idea that defines the tool.

CS : Your favorite drug ?
Jean-François Jaussaud : The air I breathe.

CS : Your greatest quality?
Jean-François Jaussaud : Not being sure of anything.

CS : An image to illustrate a new banknote?
Jean-François Jaussaud : The origin of the world by Gustave Courbet.

CS : The job you would not have liked to do?
Jean-François Jaussaud : All the others.

CS : Your greatest extravagance as a photographer?
Jean-François Jaussaud : To enter into conversation with the light.

CS : Your biggest regret?
Jean-François Jaussaud : Not to have listened to myself more often!

CS : Daylight or artificial light?
Jean-François Jaussaud : The one that makes me vibrate. Daylight because it encompasses us. Artificial light is very punctual.

CS : If God existed, would you ask him to pose for you, or would you opt for a selfie with him?
Jean-François Jaussaud : I like very much the sentence of Man Ray who answered the question: Do you believe in God? “Ask him if he believes in me. God does not exist, that’s why I photograph humans, gods and demons.

CS : The image that represents for you the current state of the world?
Jean-François Jaussaud : The mania of selfies, a modern version of the myth of Narcissus.

News :
– Exhibition in Brussels at Hangar photo art center, from April 22 to June 18, https://www.hangar.art/future around his work with Louise Bourgeois.
– Exhibition at Photo London with the Podgorny Robinson Gallery from May 12 to 15 also around Louise Bourgeois, https://photolondon.org/exhibitors/2022-2/podgorny-robinson-gallery/
– Exhibition at the Podgorny Robinson Gallery in Saint Paul de Vence, from May 5 to June 1st, 2022 : https://www.pr-gallery.com/artists-1 With a range of my different works, Louise Bourgeois, the Marseille le Panier series and my still lifes with Polaroid.