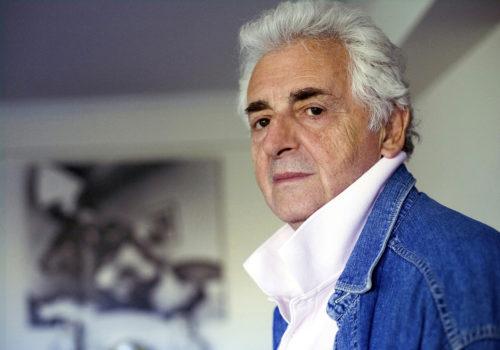 Harry Benson : Being in the right place at the right time!

Born in Scotland, Harry Benson grew up during World War II, a difficult time that drove him to seek refuge in a dream life and escape through the lens of his camera before making him one of the most famous photojournalists of his generation. He has captured some of the world’s most iconic events and people from the 1950s to the present.

But it all really started for him in 1964, when he was asked to follow the Beatles in Paris and on their first American tour. An adventure that allowed him to immortalize the “four boys in the wind” having a pillow fight at the Hotel Georges V, a picture that has become cult.

Correspondent for the Daily Express, LIFE magazine, Vanity Fair, People or The New Yorker, his only goal has always been, wherever he is, to tell the truth through his pictures. Often at the heart of the major events of the 20th and early 21st centuries, he has marched alongside Martin Luther King Jr. and photographed all the US presidents since Dwight Eisenhower, was at Robert Kennedy’s side when he was assassinated, witnessed the fall of the Berlin Wall and the resignation of Richard Nixon. Not to mention the countless stars and leaders of the world from Michael Jackson to Her Majesty Queen Elizabeth II, not to mention Brad Pitt, Giorgio Armani, Andy Warhol, Elizabeth Taylor, Jack Nicholson and Al Pacino, to name but a few, who have also passed before his lens.

If his trademark is to know how to mix public and private images of the personalities he follows, his images are also incisive and capture perfectly the spirit of the time with that little extra something.

Your first photographic click ?
Harry Benson : My first published photograph was of a roe deer photographed in Calderpark Zoo in Glasgow where I grew up. My father, S.H. Benson MBE, was the founder/director of the zoo. I sent it to the Glasgow Evening Times and didn’t hear back. One evening when riding the train back home to Clarkston (on the outskirts of Glasgow) I looked over toward the man next to me who was opening the paper to the center spread, and was I surprised…..there was my photograph….I wanted to tell him that was my photograph….I was so proud!

The man of images who inspires you?
Harry Benson : The late John Loengard, photographer and Director of Photo at LIFE was a man I wanted to take good photographers for because he knew what he was talking about.. He was the only one I ever listened to… and I miss being able to pick up the phone and talk with him today.   Being a picture editor, he helped more photographers than anyone else I know. He had a extremely dry sense of humor and I am proud to have called John my friend.

The image you would have liked to make?
Harry Benson : V-J Day in Times Square the iconic photograph of a US Navy sailor kissing a nurse taken on Victory over Japan Day, August 14, 1945 … it was real photojournalism.. which tells the whole story into one photograph…taken by the legendary LIFE magazine photographer, Alfred Eisenstadt, whom Gigi and I used to invite over for spaghetti dinners..

The one you regret you didn’t make ?
Harry Benson : No regrets…

The one that moved you the most?
Harry Benson : When I was very young, I was impressed by a photograph on the front page of the Glasgow newspaper of a baby sitting in the middle of the road with his home bombed out behind him… but today I question whether it was posed…

If among your images you had to choose only one ?
Harry Benson : It’s hard to choose between the Beatles Pillow Fight and Ethel Kennedy at the RFK Assassination…

A key image in your personal pantheon?
Harry Benson : Bobby Fischer being kissed by a wild horse in Iceland..

The quality needed to be a good photographer?
Harry Benson : Certain qualities are essential to a photojournalist—an inherent love of photography, a strong determination to succeed, and a willingness to put everything else second to your work. You also need a sense of history, an awareness of human behavior, physical stamina, a fascination with gossip, a survival instinct, a naive belief in yourself, and a bit of luck.

The secret of the perfect image, if it exists?
Harry Benson : The perfect image is not about perfect photography or technical skill…. it is about a moment that has been caught and can never be repeated.. that is photojournalism at its best… it is a one-shot only and when it happens in front of your camera and you catch it… it’s a glimpse and gone forever…to me that is the moment you can take a perfect image….

An essential photo book?
Harry Benson : For me, it is my own books, documenting from the start of my career to the present day. All photographers are competitive, and to me, this has to be my response. If other photographers would answer honestly, I believe they would say the same…

Your first camera ?
Harry Benson : Brownie Coronet Cub .. a gift from my father on my birthday…. I think I was turning 11 or 12 years old…

The one you use today?
Harry Benson : I’m using the new Canon mirrorless   with ? lens… but I also have a stable of other Canon cameras which I have used for over 20 years…I also have the wide angle Roliflex used early in my career.
What is fascinating about photography is you can do great photos at any time in your career….you don’t have to retire like an athlete as you start to age… … you know how to use your camera to get the best from them because thats what we have available today the best equipment…

Your favorite drug?
Harry Benson : I think photography is the most exciting profession that exists…so I don’t need any additional drugs, but I must say I love Coca Colas, too…

The best way to disconnect for you?
Harry Benson : Watching football (soccer) or ice hockey on television…. or playing with my dogs,Tillie the dachshund, and Daisy who is my wife Gigi’s pug.…I love dogs and have had dachshunds all my life…

Your greatest quality?
Harry Benson : I think it may be energy …or curiosity… what do you think?

An image to illustrate a new banknote?
Harry Benson : The Scottish doctor, Alexander Fleming, who in 1928 at St. Mary’s Hospital, London, discovered penicillin… truly a wonder drug that led to the introduction of antibiotics….

The job you would not have liked to do?
Harry Benson : Not sure what job I would not like, but I guarantee I am still waiting for to be called up to play Goalie for the Glasgow Rangers football (soccer) team…

Your greatest extravagance as a photographer?
Harry Benson : Flying first class to assignments… I have long legs and lots of cameras to store under the seat in front of me. I never want my cameras to be out of sight.… I don’t check cameras with baggage in case the suitcase is lost of stolen or put on the wrong flight…. then I would be out of luck by arriving at an assignment empty handed….

The values you wish to share through your images?
Harry Benson : I just want people to see what is actually happening… nothing to do with my values…. I photograph what I see and what I see should inform… I was always first in and last to leave… sometimes you think a story is over and it’s not over… don’t be so quick to move on…

The city, country or culture you still don’t know and dream of discovering?
Harry Benson : Perhaps I would go back to photograph Scotland now to see how it has changed since I left over 60 years ago…

The place you never get tired of?
Harry Benson : My home… with my wife, Gigi, my two daughters, Wendy and Tessa, and their families, and my dogs….

The most photogenic city according to you ?
Harry Benson : It’s hard ..London is great…Paris is great…New York City anytime is the most dramatic…impossible to choose just one….

If God existed would you ask him to pose for you, or would you opt for a selfie with him?
Harry Benson : I think we see God all the time …in every living creature… the wonderment of children everywhere….
the rain.. the sunshine…the stars…. the trees…the flowers… the growing crops… the oceans…vegetation….all of us who inhabit the earth… the animals … the people… everyone plays a part in making life very special…how grateful we should be for everything we take for granted… that is life…

The image that represents for you the current state of the world?
Harry Benson : Even though there is so much terrible tragedy, strife and fighting in the world today, I try see the bright side of the world …the progress we have made in so many fields is incredible….even I have lived to see the radio turn into television into computers and the internet and the emergence A/I. Curious to see what is next as we begin space travel once more…