FIAMMETTA HORVAT : A legacy of passion for photography

As her name suggests, Fiammetta Horvat is none other than the daughter of the famous Frank Horvat, a great poet of photography who passed away in the fall of 2020. After growing up in France and Italy, she moved to London in 1997. She worked  there for more than 20 years in the theater as a scenographer, a taste she inherited from her father who had no equal in creating ephemeral worlds for many of his photo productions. Great lover of narratives, she likes what has relief.

Compelled by Brexit, she decided to return to France and agreed to familiarize herself with her father’s archives. The duo worked with great complicity and the “transfer of power” was done quite naturally transforming for the young woman the test into passion. It was also an opportunity for her to discover that she had a greater understanding of photography than she had imagined. Influenced by her father’s aesthetic codes, she is just like him obsessed by the link between things.

Today, Fiammetta feels she has a duty to pass on the work her father left her, she knows every little annotated paper, all the negatives, prints, books that are piled up in the studio, as well as the important collection of photographs, the result of exchanges with other photographers that she hopes to expand in the years to come. With Mathilde Oudin, Frank Horvat’s assistant still at her side, she has undertaken to digitize all his archives and hopes to continue to bring the studio to life and go beyond the simple promotion of her father’s work and make this place a living place for contemporary photography. Also in preparation, a retrospective at the Musée du Jeu de Paume in Paris for 2022, a new book by Acte Sud, but also the reedition of the book New York, the film by Sandra Wis -the fruit of a complicity between the director and the photographer- which will be shown (let’s hope so) during the next Paris Photo and of which a short version was presented during the opening week of the Rencontres d’Arles this year…

Fiammetta Horvat : It goes back to my childhood. I was brought up with the “clicks” of my father’s and mother’s cameras, both photographers.

Who is the man of images that inspires you?

Fiammetta Horvat : Impossible to resist … my father of course!

Fiammetta Horvat : There are two, actually. One is this photo of Karin Mack “Iron Dream” that I saw at an exhibition at La Monnaie and which was called “The women house”. And then there is “L’enfant prodige” from the series by Duane Michals that can be seen at the Masculinities exhibition in Arles. 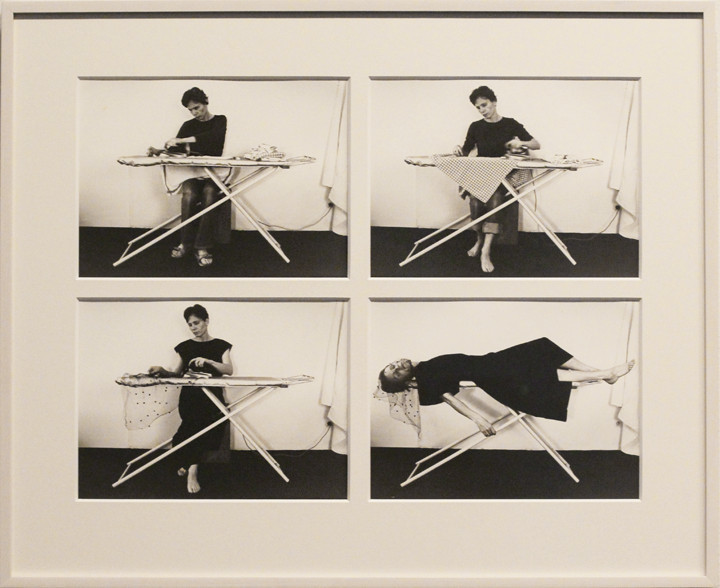 Fiammetta Horvat : I would be tempted to mention the one of Fukasé with his father, which I find very moving, but also this image of Francesca Woodman where she is in a fireplace. I really like all of Francesca’s work.

Fiammetta Horvat : This series of images by Abigail Ayman called “Abortion”. Pictures she took of herself having an abortion in a center where illegal abortions were performed. I was not so much angry about the photos, on the contrary, I thought it took a lot of strength and courage for her to take them at such a vulnerable moment, but more about the fact that society dictates to women what they can or cannot do with their bodies. Who are we to judge?

Fiammetta Horvat : Joel-Peter Witkin’s kiss, which I like very much.

Fiammetta Horvat : I think being a good photographer is a combination of introspection and honesty with yourself. It is necessary to be sincere without narcissism and disciplined.

Fiammetta Horvat : Balance. This goes beyond composition, I’m talking about a general balance between the right tone and the wrong tone, the kitsch and the non-kitsch, between the cerebral and the spontaneous, the pretentious and the naive… and aesthetics of course!

If you were a photographer, who is the person whose portrait you would dream of taking?

Fiammetta Horvat : I would have loved to photograph Charlie Chaplin.

Fiammetta Horvat : Of course I had disposable cameras, but I was also lucky enough to inherit all my father’s cameras one by one. As soon as a new device came out on the market, my father, who was a real geek, would rush to test it and would give me the one he was abandoning.

Fiammetta Horvat : Going to the theater and especially to Joel Pommerat’s plays.

Fiammetta Horvat : People often say that I have a taste for others.

Fiammetta Horvat : I like offbeat things, so I would put a picture of a Fish & Chip on it. (Laughs)

Fiammetta Horvat : I would say the aplomb with which I applied for and accepted jobs in the opera world when deep down I didn’t necessarily feel legitimate.

Fiammetta Horvat : My father’s studio, which is a fabulous place.

Fiammetta Horvat : Not going to live in New York when I turned 20.

Fiammetta Horvat : I hesitate between New-York and Vancouver … or maybe Tokyo too.

Fiammetta Horvat : I’m sorry, but for me it’s neither one or the other. I am not interested in this person at all!

Fiammetta Horvat : The self-portrait… or selfie as it is often called. A phenomenon that I think is also very present in some of the exhibitions that we can see in Arles at the moment.

What if everything had to be redone?

Fiammetta Horvat : I would sign on again for everything…