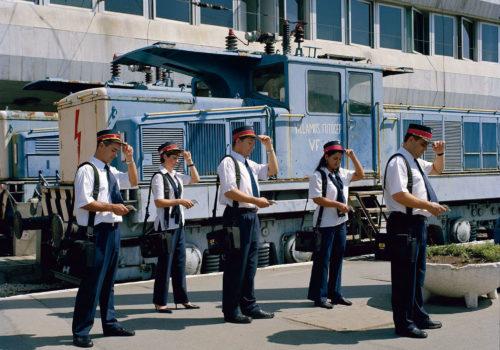 Hungarian photographer Anna Fabricius loves to portray people and more particularly today’s modern women. Her portraits are a mixture of genres. Her approach to images is very cinematic while flirting with the world of comics. She meticulously directs the entire scene and the placing of the protagonists in the image. She also likes to take situations and people out of context to get a new perspective, while adding a humorous element to the whole.

After obtaining a doctorate at Moholy-Nagy University of Art and Design, she followed her heart and instinct and immersed herself in photography, video and texts. In 2004, she began exhibiting her work outside the borders of her country.

Her work, which can be found in various private collections, has been presented in a large number of national and international exhibitions and institutions, including the Ludwig Museum Budapest, the Hungarian National Gallery, PhotoEspaña and Paris Photo, the Lodz Photofestival and the Museum of Modern and Contemporary Art in Rijeka, to name a few.

She is one of the most active artists on the Hungarian scene, regularly participating in residency programs in Vienna, New York, Lodz, Taipei or Dresden. And despite a very busy schedule, she also teaches at Moholy-Nagy University. Transmission obliges!

The image you would have liked to make?
Anna Fabricius : Photos about my son.

The one that moved you the most?
Anna Fabricius : « Tigress of Housekeeping » series from 2007.

And the one that made you angry?
Anna Fabricius : No one, because if a picture would have made me angry, it would have ment it wasn’t a good one.

A photographic memory from your childhood?
Anna Fabricius : Sitting with my half Danish and half Japanese nephews beside the lake of Balaton.

With no budget limit, what would be the work of art you would dream of acquiring?
Anna Fabricius : Helmut Newton polaroids.

According to you, what is the necessary quality to be a good photographer?
Anna Fabricius : Attention.

The secret of the perfect image, if it exists?
Anna Fabricius : The gaze.

The person you would like to photograph?
Anna Fabricius : My Grandma who passed away many years ago.

The camera of your childhood, your beginnings?
Anna Fabricius : I got my mom’s “Zenit” analogue camera. I was 13.

The one you use today?
Anna Fabricius : I’m in love with my babe, an analogue Hasselblad.

The best way to disconnect for you?
Anna Fabricius : Sport.

What is your relationship with the image?
Anna Fabricius : Quite personal.

An image to illustrate a new banknote?
Anna Fabricius : Extinct animals of the country.

The job you would not have liked to do?
Anna Fabricius : Any paperwork behind a desk.

Your greatest professional extravagance?
Anna Fabricius : I am tenacious in reaching my desired people/model.

The city, the country or the culture you dream of discovering?
Anna Fabricius : Somewhere north.

The place you never get tired of?
Anna Fabricius : My garden.

Your biggest regret?
Anna Fabricius : I didn’t stay in NYC after my residency in 2015.

Which city do you think is the most photogenic?
Anna Fabricius : I love eastern European cities with their disconsolateness.

If God existed would you ask him to pose for you, or would you opt for a selfie with him?
Anna Fabricius : None of them.

If I could organize your ideal dinner party, who would be around the table?
Anna Fabricius : Bill Viola, Marina Abramovic, Daguerre, Gerald Durrell, Leni Riefenstahl, Mark Fisher…

The image that represents for you the current state of the world?
Anna Fabricius : Too many things happen in that image.

What is missing in today’s world?
Anna Fabricius : Lack of possessiveness.

If you had to start all over again?
Anna Fabricius : I wouldn’t change anything, I’m quite satisfied with my life.