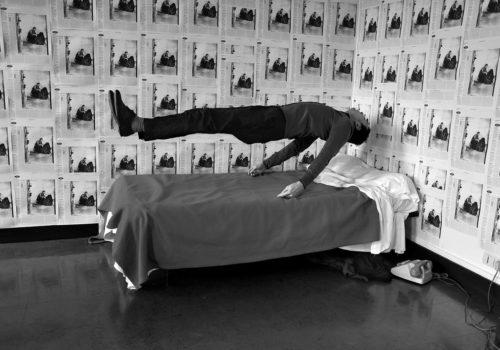 Agnès Geoffray is a visual artist who practices photography. She graduated from the Beaux-Arts schools in Lyon and Paris. In 2003, she was in residence at the Rijksakademie in Amsterdam, and in 2010 she was a resident at the Villa Medici in Rome.

A multidisciplinary artist, her work is at the crossroads of photography, sculpture, writing, performances, installations and even videos. She probes, elaborates and reactivates the images that have been haunting us for a long time. Through staging or associations, she reveals a universe of tensions, latent and mysterious.

She likes to scrutinize, fragment and probe images, sometimes in a posture of iconography, because in this way she reinterprets them, inviting the viewer to reconsider his memory.

Her works are part of many public and private collections.

The man or woman in pictures who inspires you?
Agnès Geoffray : Women photographers who inspired me : Diane Arbus, Claude Cahun, Dóra Maurer, Babette Mangolte, among others.

The one that moved you the most?
Agnès Geoffray : The first image that moved me was that of the criminal Lewis Payne, photographed before his execution by Alexander Gardner, in 1865. For his beauty, for the imminence of his death, for the spectral dimension of the photograph.

And the one that made you angry?
Agnès Geoffray : I have no anger.

A key image in your personal pantheon?
Agnes Geoffray : A woman, in the distance, in the wind.

A photographic memory from your childhood?
Agnès Geoffray : Me, blurred, running in front of the camera, laughing out loud.

With no budget limit, what would be the work you would dream of acquiring?
Agnès Geoffray : I regularly buy anonymous photographs, which, even without an author, touch me infinitely.

According to you, what is the necessary quality to be a good photographer?
Agnès Geoffray : Empathy for one’s models, an ethical look at the images, and to be carried away.

The secret of the perfect image, if it exists ?
Agnès Geoffray : The one that resonates.

The person you would dream of photographing ?
Agnès Geoffray : Virginia Woolf’s hands.

The camera of your childhood?
Agnès Geoffray : From my adolescence, a Nikon F2 Photomic.

The one you use today?
Agnès Geoffray : A Nikon D800, or rental cameras as needed.

The best way to disconnect for you?
Agnès Geoffray : Swimming, gliding.

What is your relationship with images?
Agnès Geoffray : I am attached to images that evoke other images, I believe in the evocative power of photography, in its ability to move us.

Your greatest quality?
Agnès Geoffray : To be contemplative.

Your latest folly?
Agnès Geoffray : A training in falconry.

An image to illustrate a new banknote?
Agnès Geoffray : The face of Simone Veil or Olympe de Gouges.

The job you would not have liked to do?
Agnès Geoffray : No idea, I didn’t do it.

Your greatest professional extravagance?
Agnès Geoffray : I am not very extravagant, I like pure shots, neutral contexts, to make possible a projection of the imagination.

What do you think are the bridges between photography and design?
Agnès Geoffray : To open photography towards a sculptural dimension, to transform and rethink the photographic object.

What city, country or culture do you dream of discovering?
Agnès Geoffray : The cave art sites that are inaccessible today.

The place you never get tired of?
Agnès Geoffray : My childhood walks.

Your biggest regret?
Agnès Geoffray : I don’t have any.

Color or B&W?
Agnès Geoffray : Rather B&W, for the temporal indeterminacy.

Which city do you think is the most photogenic?
Agnès Geoffray : I am not very attached to photographs of cities.

If God existed, would you ask him to pose for you, or would you opt for a selfie with him?
Agnès Geoffray : I do not believe in god.

Which image represents for you the current state of the world?
Agnès Geoffray : Man looping back, American Night-club #63, by Paul Graham. For the dissolving landscapes, the invisibility of the most destitute, and the look back on a disappearing world.

What is missing in today’s world?
Agnès Geoffray : Empathy towards the living.

If you had to start all over again?
Agnès Geoffray : Why start again…