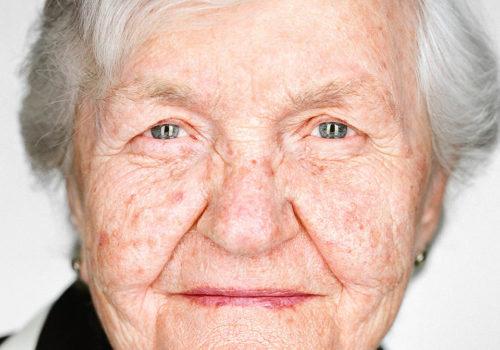 The Museum of Jewish Heritage – A Living Memorial to the Holocaust presents the first major museum exhibition in the United States of Martin Schoeller’s Survivors: Faces of Life after the Holocaust, an exhibition featuring 75 close-up portraits of Holocaust survivors.

The portrait series by award-winning portrait photographer Martin Schoeller includes 75 photographs that capture Holocaust survivors in Schoeller’s signature style, with intense lighting in extreme close-up. His subjects gaze unflinchingly at the viewer, revealing their humanity as well as their pain, struggle, hope, and resilience. Each portrait is paired with a biography, as their stories come together to create a collective history. The exhibition also features behind-the-scenes video footage documenting the photography shoots at Yad Vashem, where the project originated in 2019.

“This project is very close to my heart, born out of my experience growing up in Germany, and I’m so proud to bring it to New York and the Museum of Jewish Heritage,” said Martin Schoeller. “I hope that the series resonates with the survivor community here and inspires New Yorkers of all backgrounds to envision a more tolerant and peaceful future.”

German-born Schoeller is one of the world’s most prominent contemporary portrait photographers. He created the series to combat the rising hate and antisemitism across the globe and drew inspiration from the Holocaust education he received in his youth.

“As an institution dedicated to educating visitors about the Holocaust, we are preparing for the inevitable future, where we no longer have survivors with us,” said Jack Kliger, President and CEO of the Museum of Jewish Heritage – A Living Memorial to the Holocaust. “These portraits capture the humanity of survivors and remind us that the atrocities they endured are not so far away. They also preserve their memory for generations to come.”

“The images captured by Martin Schoeller peer into the eyes and souls of these 75 Holocaust survivors. Several of these powerful portraits hang in my office on the Mount of Remembrance,” remarks Yad Vashem Chairman Dani Dayan. “For decades these survivors have guided Holocaust remembrance, research and education. Now, nearly 78 years later, they not only continue to inspire me and all of humanity to remember, they also encourage us to act and stand up to injustice and hatred wherever it may be found.”

The portraits will be on display in the Museum’s rotunda on the third floor, recently named in memory of Rita Lowenstein, who survived the Holocaust as a hidden child, under a false identity.

“It is fitting that the first exhibition on display in the Rita Lowenstein Gallery is a tribute to the humanity and resilience of Holocaust survivors,” said Wendy Lowenstein Sandler, Rita’s daughter. “My mother left a legacy of resilience and also a commitment to Holocaust education. She believed strongly in having hope for the future and sharing survivors’ stories with the next generation, so we never forget.”

Surrounded by the portraits, visitors can consider the personal experience tied to each person who survived the Holocaust. Their messages are essential and galvanizing towards love and action.

Sara Leicht z”l (1929–2021) told Schoeller, “The most important thing we can do is to love. To love more and to love everyone. To be kinder, more humble and more generous, and to be better people. To love our fellow human beings, whoever they are.”

Eva Lavi (b. 1937) shared her mandate: “We have much work to do in order to convince the world that the worst thing is baseless hatred. The world should stay away from hatred, from antisemitism and Holocaust denial, and from all forms of evil.”

The Museum’s new permanent exhibition, The Holocaust: What Hate Can Do, is similarly focused on individual stories, bringing together over 750 artifacts to tell the history of the Holocaust through personal stories, family objects, and more.

Visitors can use the Bloomberg Connects app to enhance their visit to both exhibitions with an audio guide and artifact details.

Survivors: Faces of Life After the Holocaust is made possible by The Knapp Family Foundation; the Goldie & David Blanksteen Foundation; David Wiener 189897, son of Moishe Chaim and Hannah Wiener; and other generous supporters.

Survivors: Faces of Life After the Holocaust is co-organized by Martin Schoeller and Museum of Jewish Heritage – A Living Memorial to the Holocaust. Originated by Yad Vashem on the occasion of the 75th Anniversary Liberation of Auschwitz. Special thanks to Kai Diekmann, Chairman of the German Friends of Yad Vashem, and Anke Degenhard who were instrumental in realizing the project at Yad Vashem.

Martin Schoeller, born in Munich in 1968, is one of the most prominent contemporary portrait photographers and is renowned for his close-up portraits. After studying photography at the Lette-Verein in Berlin and Hamburg, he worked as Annie Leibovitz’s assistant from 1993 to1996. Schoeller frequently collaborates with prestigious magazines, such as Rolling Stone, National Geographic, Time, GQ, Esquire, Entertainment Weekly, and New York Times Magazine. Like Richard Avedon before him, he also served as the New Yorker’s editorial photographer. Schoeller’s work can be seen around the world and is included in major collections. Schoeller is famous for his ‘big head’ portrait photos: full-frontal, hyper-realistic close-ups of faces. He photographs all his subjects – whether public figures or anonymous individuals – in the same serial way, using special lighting and photographing in extreme close-up.