The Jewish Museum and Tolerance Center : The Lonka Project : Numbered 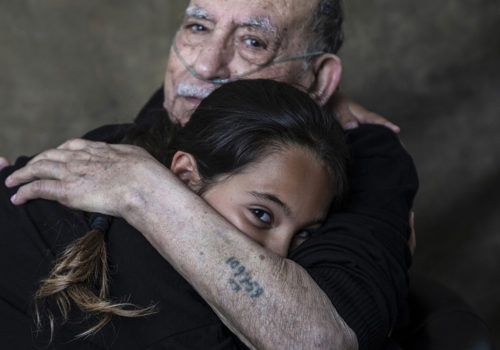 The Jewish Museum and Tolerance Center presents: The Lonka Project: Numbered, in honor of the International Holocaust Remembrance Day. The exhibition comprises over 60 photographs of Shoah survivors.

The history of the Lonka Project dates back to 2018. Dr. Eleonora (Lonka) Nass, a Holocaust survivor herself, has barely related her experiences to her children. “I was raised in a house of silence,” remarks Rina Castelnuovo, Lonka’s daughter. “I knew what the barrack housing was, and who the Nazis were, but when my mother passed away, overnight, the responsibility over the past was transferred to us.”

After her mother’s death, Rina and her husband Jim Hollander, both photojournalists reporting on the Middle East, came up with an initiative to preserve the Holocaust survivors’ stories by having their photo-portraits taken and documenting their memories.

Rina and Jim asked their fellow professional photographers to produce the portraits of Shoah survivors. There were no strict requirements for the pictures: it could be a colour or black-and- white photo, taken from any angle or perspective.

The international photo community has responded with enthusiasm: over 300 photographers from 30 countries have participated in the project. Among them are members of the Magnum Photos agency Alec Soth, Gilles Peress, and Eli Reed; World Press Photo award winners Ed Kashi and Jane Evelyn Atwood.

Each of them managed to find a personal approach to conveying the survivors’ frailty and strength, resulting in masterful photos of Anita Lasker-Wallfisch, a cellist and former member of the Women’s Orchestra at Auschwitz; UK street-photographer Dorothy Bohm; Liliana Segre, an Italian lifetime Senator; weightlifting champion Sir Ben Helfgott, and an Oscar-winning film director Claude Lelouch.

Anna-Patricia Kahn, director of the CLAIRbyKahn Gallery in Zurich and a member of the Lonka Project, Nina Gomiashvili, independent curator, and Liya Chechik, the Jewish Museum and Tolerance Centre curator curates the exhibition at the Jewish Museum. They have chosen over 60 photos, which prompt the visitors to engage with history through a personal perspective. The curatorial team strove to reflect an emotional dialogue between the photographers and the survivors: “We are the last generation with a unique opportunity to bring together various perspectives from adjacent epochs, and relive the personal memories of Holocaust survivors.”

The Lonka Project is currently ongoing, with new images being submitted regularly. The Jewish Museum and Tolerance Centre has joined the initiative as a partner, prompting Russian photographers to join the project. Jegor Zaika, Olga Izakson, Anna Shmitko and Maria Gruzdeva produced portraits of Russian survivors of the Holocaust, among them – the playwright Alexander Gelman and the theatre director Kama Ginkas.