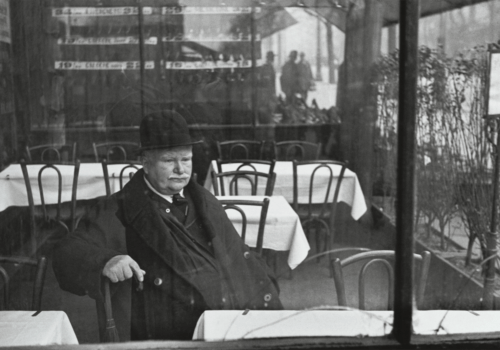 The Hulett Collection presents L’Hiver à Paris, an exhibition that is as much a treasure trove for the eyes as it is an ode to the city of Paris, France. Pulling inspiration from Le Salon, the official art exhibition of the Académie des Beaux-Arts in Paris which focused on encouraging the development of fine arts and serving as an outlet for young artists from 1667 to present day. Following in those footsteps, L’Hiver a Paris aims to promote a highly curated selection of works from 20th Century masters such as Henri Cartier-Bresson, André Kertész and Louis Stettner alongside contemporary fine art photography’s emerging prodigy, Kit Young.

This curation of images tells the story of Paris, now and then. Each artists’ keen eye focused on recognizing those simple yet meaningful moments of quotidian Parisian life, the beauty behind the banal. Much like his predecessors, André Kertész and Louis Stettner, Kit Young is a guest of Paris, an émigré, invited in, time and time again, to effortlessly capture the subtle glints of light and life that the city provides.

At the end of World War II, when the French Humanism movement was born, the need to capture the human experience was especially strong and equally so today, reminding us that life goes on. Kit Young carries on this photographic style made famous by his predecessors in the exhibit and shows us that the inherent allure for both Paris and photographic art lies somewhere between reality and poetry.

About The Hulett Collection:
The Hulett Collection is a fine art gallery specializing in classic 20th century and contemporary photographic
works. Native to Tulsa, Oklahoma, Michael Hulett started in the fine arts world more than 10 years ago in Los Angeles as the Director of the world-renowned Peter Fetterman Gallery in Santa Monica. He has curated more than 85 exhibitions across Los Angeles, San Francisco, New York, London and Paris. Michael brings his more than 20 years of knowledge of the medium’s history and its foremost photographers to The Hulett Collection.