The Gallerie d’Italia – Turin Museum : Between Photography and Baroque 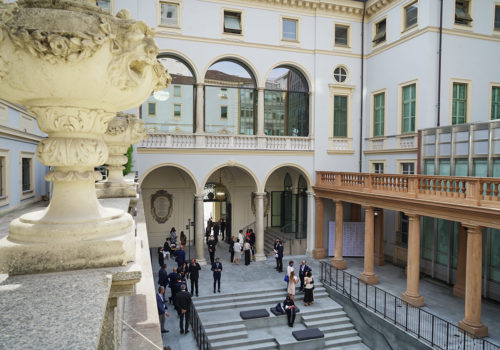 Ten thousand square metres of exhibition space on five floors, of which three are underground, dedicated to photography and Baroque in Palazzo Turinetti, Piazza San Carlo, the Bank’s historical base, are the core of the Gallerie d’Italia – Turin, the Intesa Sanpaolo Group’s fourth museum. Inaugurated in the late spring of 2022, it’s hosting two photographic exhibitions: The fragile wonder. A journey in changing nature by Paolo Pellegrin and From the war to the moon 1945-1969. Glimpses from the Intesa Sanpaolo Publifoto Archive.

Intesa Sanpaolo is Italy’s leading banking group with a significant international presence. It is an engaged patron of Italian culture as well, which created its own network of museums, the Gallerie d’Italia, to host the bank’s artistic heritage and as a venue for cultural projects.

The spaces of the historic building in Turin have been transformed into a place where photography and video art can document and preserve images and events to promote issues connected with ESG (Environmental, Social, Governance) sustainability. The Gallerie d’Italia – Turin are also the new home of the Intesa Sanpaolo Publifoto Archive (seven million shots taken between the 30s the 90s by one of the then major agencies of Italian photojournalism).

The four museums of the Gallerie d’Italia – Milan, Naples, Turin and Vicenza – consolidate Intesa Sanpaolo’s museum network managed by the Bank’s Progetto Cultura, created to enhance the historical and artistic heritage. The Turin museum is meant to display temporary exhibitions, commissioned by internationally renowned photographers, and to organise activities such as teaching for schools, scientific research, and initiatives for social inclusion.

At present, it hosts the exhibition The fragile wonder. A journey in changing nature by Paolo Pellegrin (under the Patronage of the Piedmont Region and the City of Turin), a photographic reportage dedicated to climate change and curated by Walter Guadagnini with the contribution of Mario Calabresi. The work is an original commission and provides a personal interpretation of the relationship between humankind and natural environment. Paolo Pellegrin has been travelling for over a year in search of images that immortalise the grandeur of nature: from Iceland to Greenland, from Sicily to Namibia. His shots centre around the four natural elements (earth, water, air and fire), to which mankind has traditionally attributed metaphorical and spiritual interpretations.

The economic boom, the industrialisation, the forced internal migration from the southern countryside to the cities of the North, changed the face of Italy. The exhibition alternates images of factory work with those of beauty contests, sporting and singing competitions, bridges and skyscrapers construction as well as of tragedies, both natural, such as the floods of Florence, and those caused by man, such as the collapse of the Vajont dam. And these very photos recount huge transformations made without taking due account of the Country’s fragile territory.

The “long wing”, designed for classic photography, leads to the rooms on the third underground floor, where Intesa Sanpaolo’s Publifoto Archive is housed. It can be seen by visitors through a window. Digitised images can be viewed thanks to a touchscreen panel. On the same floor, there is also a multimedia room (40 x 14 m) with seventeen 4k projectors, thought to give visitors the feeling of being immersed in the images and videos.

Furthermore, on the Palace’s main floor, the museum exhibits around forty artworks (paintings, sculptures, tapestries, furnishings) from the 14th to the 18th centuries, that fit the building’s late baroque ornamentation (door arches, mirrors); a dedicated room houses nine large canvases from the 17th century, that used to decorate the ancient Oratory of the Compagnia di San Paolo.