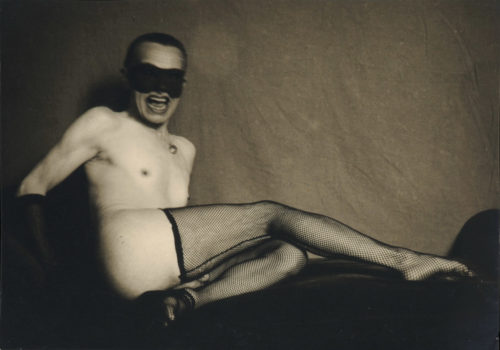 On 13 November, the Photography department will be auctioning a new major collection : the collection of nearly 200 works by Pierre Molinier compiled by Emmanuelle Arsan, one of the artist’s muses. It includes photographs, drawings, working snapshots and personal letters.

Pierre Molinier is more than a painter or a photographer. His fiction is nourished by both disciplines. He is a contemporary artist before his time. His gelatin silver prints, which he cuts up and assembles, retouches in ink and re-photographs, prolong his pictural universe. Very quickly the artist understood that the language of photography, a mirror more faithful than his stroke, would be the ideal vehicle to confound reality and operate his own tansformation into the ideal being : androgynous, half man, half woman : the Chaman.

A lot was said and written on Pierre Molinier and his relationship to Emmanuelle Arsan / Marayat, (and her husband Louis-Jacques Rollet-Andriane). If the certainty persists that the novel Emmanuelle was written with four hands, the mystery of a physical consumation between Marayat and Pierre Molinier remains entire. Unable to trust the meanderings of a reputed mythomaniac or the confessions of Emmanuelle, who said she spent a night naked in his arms, during a visit in Bordeaux in 1967, the ultimate keys to the mystery could be among the letters, photographs, drawings and objects dispensed by the cursed painter to his muse. A clue : an annotation in pencil on the back of a reproduction of the drawing “Pour Hanel” in the red box : “We did it…”.

No matter what, the works from the collection of Emmanuelle Arsan, offered by the artist during his lifetime, sometimes dedicated, signed, or annotated in his hand, are intagible proof of the passion Pierre Molinier felt for Marayat, whom he considered his “Mirror”. In life, they shared the same vision of pleasure and love. They took all their deepest secrets with them in death.