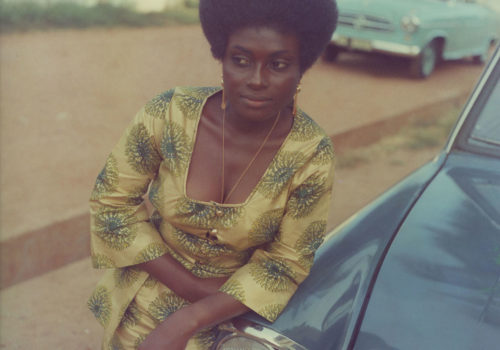 The Detroit Institute of Arts (DIA), one of the oldest museums in the United States, has acquired twenty-two works by James Barnor. As a result, the North American institution now holds a series of prints dating from 1950 to 1980. The selection brings together some of Barnor’s earliest photographs of 1950s Ghana, black-and-white and color photographs taken in England during 1960s, and prints from the 1970s, when Barnor helped introduce color photography to the country. The DIA has chosen three vintage prints to illustrate Barnor’s practice of portraiture: a portrait of Rema Nelson, who modeled for the anti-apartheid “Drum” magazine; a portrait of Sarah Mills Okai, a model for “Flamingo” magazine; and a 1970s portrait of a woman in a traditional Adangme dress and kente during a festival at Ga Mantse Palace in Accra.

The Smart Museum of Art at the University of Chicago has also acquired eleven vintage and modern prints by James Barnor. The acquisition comprises eight gelatin silver prints from the 1950s and 1960s. The photographs demonstrate Barnor’s mastery in both documenting Ghana in the 1950s — a decisive period during which the country gained its independence — and capturing the spirit of 1960s Swinging London. The new acquisition feature two vintage prints from the 1970s taken during a festival at the Ga Mantse Palace in Accra, and a vintage portrait of a woman in Barnor’s studio X23 in the city.

Born in 1929 in Ghana, James Barnor opened his renowned Ever Young studio in Accra, where he immortalized a nation at the moment of its independence. He was one of the first photojournalists to collaborate with “The Daily Graphic”, a newspaper published in Ghana by London’s Daily Mirror Group. In 1959, two years after Ghana’s independence, Barnor moved to London to deepen his technical knowledge of the medium. He discovered color photography at the Medway College of Art and his pictures were published on the front page of Drum, an important magazine founded in South Africa in 1951 and symbol of the anti-apartheid movement. He eloquently captured the spirit of Swinging London and the experiences of the African diaspora in the British capital. In the late 1960s, he was recruited by Agfa-Gevaert and returned to Ghana to contribute to set up one of the country’s first color laboratory. He stayed there for the next twenty years, working in his new studio X23 as a freelance photographer and for state agencies in Accra. Today, Barnor lives in the United Kingdom and devotes most of his time to his work, in a spirit of transmission. James Barnor’s work has been featured in numerous exhibitions and publications in recent years. A touring exhibition entitled “James Barnor: Accra/London – A Retrospective” will open in May 2021 at the Serpentine Gallery in London and will further promote the work of James Barnor worldwide.

The Detroit Institute of Arts