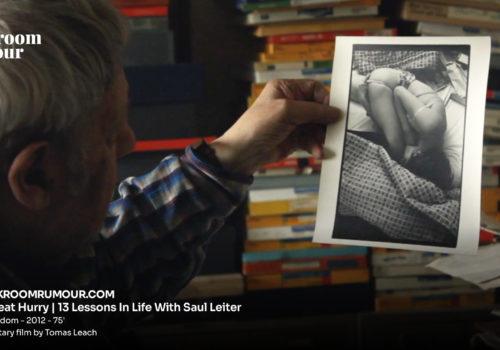 Launched in March 2021, The Darkroom Rumour online platform allows people to view a rich array of films about photography.

“The idea was to be able to offer photography and image lovers a place where they can find the films that cannot be seen anywhere else.” It is in these terms that Thomas Goupille, at the origin of The Darkroom Rumour presented his project. With an eclectic offer and attractive prices, his platform is the answer to the cruel lack of visibility of the eighth art on national channels.

It is this lack of interest of the television and the CNC for photography that pushed Thomas Goupille, ten years ago, to “stop asking permission” to start producing and directing these films with his own means. Surrounded by a great team, he was able to build up a catalog of a certain size, made available to the public more easily thanks to the recent democratization of online platforms.

In addition to its original creations, The Darkroom Rumour broadcasts reference films from outside productions and from all eras, offering a wide and sharp program, composed of different categories: Focus, Themes, White Cards, Personalities and articles to deepen our knowledge. Each film is accompanied by a short presentation and a list of the themes that are addressed, as well as keywords offering the possibility of accessing certain films according to one’s interests, and, above all, of allowing oneself some surprises and discoveries.

A part of the catalog is dedicated to documentaries on photographers, the great names, such as Robert Frank, Jane Evelyn Atwood, Dolores Marat or Saul Leiter, as well as the younger ones, Sara Imloul for example. A selection of photographic films is also proposed, Maxime Riché’s documentary series on the mega-fires in California (Paradise, 2021) or the testimony on the collateral damage of the imprisonment of Valérie Winkler (Sentences, 1991).

With the idea of “inspiring users by showing all the richness and possibilities of the photographic world”, the platform also offers a series of films on the different photographic techniques, such as the glass plate or the chemigram, as well as on the professions surrounding that of photographer, such as framers and printers. These focuses are very successful: “The public is very interested in this kind of subjects, to learn more about photography and backstage.

The Darkroom Rumour, the only audiovisual platform dedicated to photography, whose entire content is available in French and English, attracts a very international audience. Its success is no longer to be proven: after the first week’s trial, 90% of users remain subscribers!