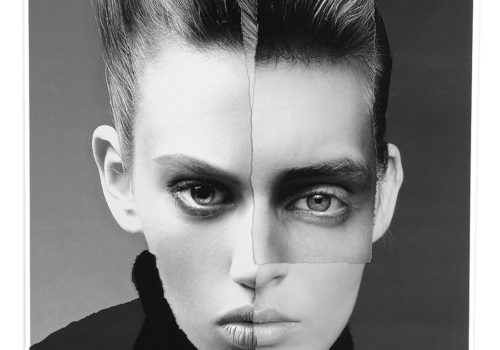 The Curve recently presented Rebel Rebel, a collection of large-scale collage works by the British fashion and beauty photographer Justine Laeufer in a solo presentation of her work at POSITIONS Art Fair Berlin.

Uncomfortably beautiful, timelessly punk, disconcertingly fragile – such are the works of the photographer and collage artist Justine Laeufer. Born in London in 1967, Laeufer now lives in Berlin and has made a name for herself internationally as a sought-after fashion and beauty photographer. She has been working in the industry for over twenty years for leading publications including Vogue, Harper’s Bazaar, Tatler, Citizen K, and Tank Magazine, and is known for her unconventional casting and strong conceptual fashion imagery.

Justine Laeufer’s collages are entirely analogue and handmade down to the last detail. Each of her works is unique. She exclusively uses her own photographs in these mostly large-format collages, dismantling and altering them in the process to create a new person, a new identity, a new self. A book project in 2014 set this new and liberating direction in motion, restoring her faith in her creativity which she feared it had been lost to the constrains of commercial pressures and prejudices in the fashion world. Inspired by Dadaism, Constructivism, and London Punk, Laeufer discovered a new medium for herself in collage.

Laeufer’s works are in her own words “collisions of visions, papers, structures, and thoughts”. They are all about “engaging with parts that don’t fit together as expected and yet still somehow harmonise”. She is also interested in conflicts of the external kind: rebellion vs. conformity, digital vs. analogue, feminism vs. masculinity as well as, on a more personal level, fragility vs. strength, creative freedom vs. commercial work, nostalgia vs. the here and now. It is these contrasts that make Justine Laeufer’s collages so incredibly powerful. They are the works of a rebel on a quest.

The Curve is a nomadic gallery dedicated exclusively to exhibiting and promoting contemporary collage art. Young emerging artists as well as their more established colleagues both find a platform here. Founded in 2017 by the Swiss collage specialist Valerie von Meiss as a private art space on the 3rd floor of an apartment building in Berlin-Mitte, the Curve is always on the move, constantly in flux.