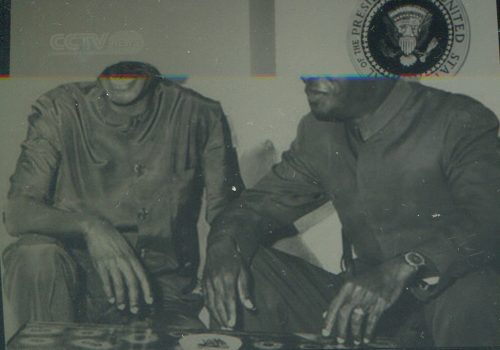 What do photographers Seydou Keita, Malick Sidibé, Youssouf Sogodogo, Alioune Ba, Samuel Fosso, Pieter Hugo, Mouna Karray, Baudouin Mouanda, Aïda Muluneh, Kiripi Katembo, Athi Patra Ruga, Zanele Muholi or Omar Victor Diop have in common? For each of them, if the Bamako encounters were not the place of their revelation to the world, they were at least an exceptional springboard for their career. Since its creation in 1994, the African Biennial of Photography has aimed to reveal young talents from the African world. No exception, therefore, for this 12th edition, which gives pride of place to young artists under the age of 35. The curatorial team, made up of Artistic Director Bonaventure Soh Bejeng Ndikung, young co-curators Aziza Harmel, Astrid Sokona Lepoultier and Kwasi Ohene-Ayeh, and curatorial advisers Akinbode Akinbiyi and Seydou Camara, met several months ago in Bamako to proceed to the selection of the artists among some of the 330 applications sent.

A few days ago, when the Bamako Encounters launched their “anniversary” edition marking their 25 years of existence with a selection of more than 80 proposals from artists and collectives, visitors could see the many names of artists unfamiliar, even unknown, or those of rising stars in photography. Born after the second half of the 1980s or in the 1990s, these photographers, videographers and visual artists using the image or the photographic medium in various forms, intrigue by the concerns that seem to animate them. These artists live with their times but never omit the history of the continent. They remind us that the past is omnipresent in our daily lives, demonstrating that yesterday’s dreams and concerns necessarily have their pendants today but above all, that all the wounds have not been closed.

Engaged in a resistance to the historicist apparatuses in force, many of them express their desire to get out of the shackles of an incomplete general memory vis-à-vis a history that is that of their ancestors from the African continent and therefore, theirs. As the theme “Streams of Consciousness” in this edition suggests, which invokes the memory of individuals in the act of creation, it seems that the stories told by this young generation are inevitably linked to history, movements, events, thoughts, torments, exultations of the continent to which they are attached. The anti-colonial, anti-imperial, anti-patriarchal struggles of yesterday still resonate but the future in construction which they portray is also full of promise.

Thus, collective memory, and sometimes mixed with personal memory, is central in the work of several young artists who make use of archival material including Keli Safi Maksud who questions how the memory of the years of post-independence is transmitted to generations 2.0, or Amina Ayman Kadous who examines the way in which we build our memories through trajectories anchored in the space-time of our experiences. Maxime Jean-Baptiste, Nidhal Chamekh and Kitso Lynn Lelliott, each in their own way, deal with denials of existence and hegemonic memories relating to the contexts of historic Western imperialism.

In line with the human movements of yesterday and today, questions related to the complexity of contemporary identity are recurrent, with young artists who deal with diasporic issues such as the Londoner of Sierra Leonean origin Adama Jalloh, who tenderly photographs African communities in the British capital. We will also find Yagazie Emezi, who highlights the markers of identity of the Hipco (Liberian rap) subculture inherited from the historical exchanges between Liberia and the United States while capturing the resilience of the Hipco music scene in a Monrovian club following the Ebola crisis that hit the region.

An analysis of the work of these young photographers and videographers also gives rise to a real impression of desire to return to the origins, of respect for ancient esoteric traditions which involve the relationship between man and nature. This is the case for example of one of the youngest of the selection, Halima Haruna who tries to activate a peaceful dialogue between crude oil and Humanity through a performance of divination, and this in the context of the infernal spiral inherent in oil exploitation in her country, Nigeria. The Malian Dickonet, on the other hand, invokes the gods of the river to remind us of the vital and sacred ties that unite man and the river, and the need for mutual benevolence. This is also the case with Léonard Pongo whose work takes as its starting point the Luba beliefs which lead him to cross the natural territories of the DRC to create new imaginations, halfway between fiction and science.

The question of the genders and the violence associated is also at the heart of the reflections. The engagement of women on these issues is palpable, with artists responding to the “invisibilization” and oppression historically suffered by black women. Buhlebewze Siwani discusses the impact that Christianity has on the perception of the body of the black woman in South Africa; while Adji Dieye takes up the advertising codes of a bouillon cube that is very popular in Africa to demonstrate how these can perpetuate stereotypes about how African women are supposed to be and act. Other angles of reflection on gender include the creation of spaces of expression among black LGBT communities in European capitals with Dustin Thierry or the tensions between traditional masculinity and the creation of the self in Ibrahim Ahmed.

Precisely, the questions linked to the construction of the self and to the inner monologue have been engaged by several artists including Eric Gyamfi or Godelive Kabena Kasangati who, at a time when constraining modesty is no longer required, and we can see this with the development of social networks – have the audacity of expressing the intimate self, of the externalization of personal emotions. Fanyana Hlabangane probes the loneliness of the subjects he meets during his wanderings in Johannesburg, a loneliness reflecting his own condition. Rahima Gambo relates the wandering of her own body in space and the catharsis of her mind in response to the 2017 suicide bombings at Maiduguri University by unidentified women.

In short, these young artists tell us stories about their time and raise many diverse and varied current societal questions such as the daily lives of women, mothers and students who sell their bodies to support themselves in Yaoundé at Antoine Ngolke-Do’o’s, the interdependent relationships between human beings and technologies with Afrane Akwasi Bediako, the development of seaside leisure activities in Egypt despite the politico-economic context of the country with Roger Anis, or the role played by the marabouts of Djéné in the peacekeeping in Mali with Hamdia Traoré. One of the youngest of this 12th edition, Godelive Kabena Kasangati, 23, says: “For me, these Bamako Encounters are like therapy: it is a rebirth of my ego as a photographer and as an individual. (…) I realize the dream of telling stories through photography and being listened to.”. To Godelive and to all the other young talents of this 12th edition of the Bamako Encounters, we wish them to continue telling stories, those of the world of yesterday, today and tomorrow, which are and will be heard carefully.