The Addison Gallery of American Art : Robert Frank : The Americans 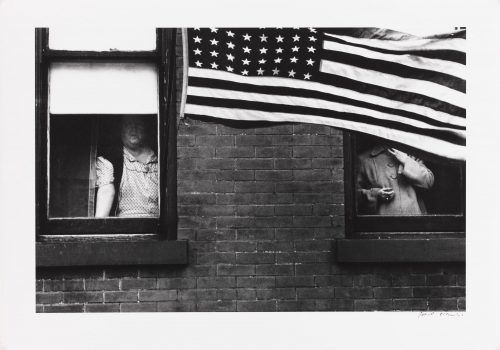 First published in France in 1958 and in the United States in 1959—in the midst of the Cold War—Robert Frank’s The Americans is among the most influential photography books of the 20th century. The Addison is one of only four museums in the world to own a complete set of the images from the book.

In 1955–56, a Guggenheim Fellowship allowed the Swiss-born photographer to travel throughout the United States with the goal of creating a book that he described as a “visual study of a civilization.” Frank’s dark and grainy images are the work of an outsider looking in and reveal his ambivalence toward his adopted country. The eighty-three carefully sequenced photographs, edited down from more than twenty-seven thousand, are raw documentation of a country in transition. They celebrate its strengths as an emerging superpower while exposing the cracks in the veneer of optimism and opportunity that defined its postwar culture. As Jack Kerouac wrote in the introduction to the book, “Robert Frank, Swiss, unobtrusive, nice, with that little camera that he raises and snaps with one hand, he sucked a sad poem right out of America onto film.”

Frank’s unsentimental vision of a modern America that looked surprisingly lonely and dislocated was initially censured by the critics. However, the honest and poignant beauty captured in these images and his distinctively expressive and visceral style were soon embraced by younger photographers. More than a revelation of a specific moment in American history or a manifesto for a new photographic style, The Americans is a work of resonance that probes the defining and enduring dualities of American life and culture—hope and despair, affluence and want, freedom and limitation, community and isolation. Exploring the gulf between appearance and actuality, national ideals and regional specificity, American myth and street-level reality, these provocative and nuanced images ask what America is.

About the Addison Gallery of American Art

Devoted exclusively to American art, the Addison, which opened in 1931, holds one of the most important collections of American art in the country. Its collection includes more than 23,000 works by artists such as John Singleton Copley, Thomas Eakins, Winslow Homer, George Bellows, Georgia O’Keeffe, Jackson Pollock, Lorna Simpson, Kara Walker, and Mark Bradford, as well as photographers Eadweard Muybridge, Walker Evans, Robert Frank, Cindy Sherman, Dawoud Bey, and many others. The Addison Gallery, located in a stand-alone building on the campus of Phillips Academy—a residential school of grades 9 through 12 in Andover, Massachusetts—offers a continually rotating series of exhibitions and programs, all of which are free and open to the public.

The Addison Gallery of American Art