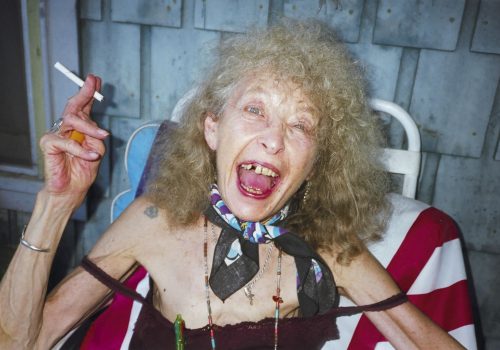 Terry Richardson is undoubtedly one of the most influential, controversial and noticeable photographers of today. Turning the fashion industry upside down, Terry has transformed photography with the simple formula of the bright-flash-snapshot, fused with energy, sex, and of course, Terry Richardson. Never shy of starring in his own shoots, his face and personality have become ingrained into the consciousness of a generation – his flannel shirt, lamb chops and glasses icons of a bastion of culture branded upon everything from t-shirts to tattoos!

It is easy to confuse the public persona with the real thing. Where is the line? Is there a line?

Mom & Dad strips Terry Richardson to his bare minimum: the series of portraits, letters and interiors document the very origins of Terry Richardson, his Mom and Dad. Treating the subject as any of his other shoots, Terry delves deeply and indiscriminately with his camera revealing the all too personal nature of his life… his family life.

As with all things Terry Richardson, there is no lacking of controversy, intimacy, and brutal honesty. The images follow Terry’s father, Bob Richardson (himself an outspoken photographer of a generation), through his gradual decline into madness and paranoia until his death. In turn, Terry’s mother, a colourful Californian, uncoyly gives us the finger as easily as a smile, all the while unfazed by her vulnerability after an accident left her partially paralysed. The intimate nature of the series shares something more than everything that Terry has so far given us. Not only is it a portrait of his Mom and Dad, it is a naked portrait of Terry himself.

Terry’s images don’t desist to shock, and his camera has no boundaries nor judgement: just the simple truth of the snapshot, an intimate portrait of his family. It reveals the drive that Terry continues to show us through his work, marked in a collage by Bob Richardson: ‘When you fall, you get back up’. That seems to be what Mom, Dad, and Terry have always done.