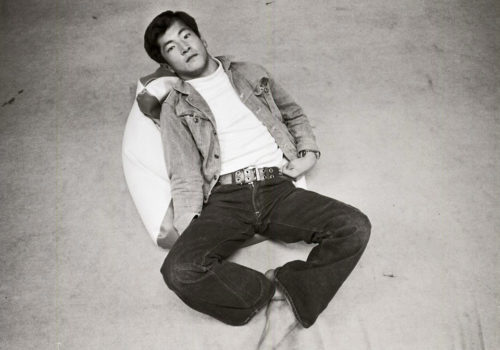 A chance meeting with photographer Eugene Smith on the streets of Tokyo in 1972 led Takeshi Ishikawa on a journey he could not have envisaged. More than four decades after Smith “kidnapped” Takeshi on a train bound for Minamata, the project that epitomised Smith’s photojournalistic ideology has also directed Ishikawa’s path and led to his own book, “Minamata Note 1972-2012”.

Minamata is known for the disease named after this Japanese fishing village. For 37 years the Chisso Corporation had dumped contaminated wastewater into Minamata Bay poisoning the water with high doses of methylmercury. But it wasn’t until the 1960s that the horrific neurological illnesses and birth defects caused by the poisoning were given a name; Minamata Disease. And it was Eugene Smith’s photographic documentation of those affected that shocked the world.

Takeshi tells me that as a young photographer just starting out he couldn’t believe his luck when he ran into Smith, who was out shopping with his wife Aileen, in Takeshi’s neighbourhood in Tokyo. “I said, are you Eugene Smith? I told him I’d seen his exhibition, and thought it was very great. Then I asked, but why are you still here now your exhibition has finished? He told me he wanted to shoot in Minamata. Of course I knew about Minamata, but at that time I wasn’t that interested, in some ways it was old news”.

They chatted for a while and Takeshi told Smith he’d recently started his own freelance photography business. “Then he invited me to his apartment, which was close by, and I wondered why he was asking me, a stranger?” Curious Takeshi followed the pair back to the apartment, which had been lent to Smith by a sponsor.

“There were packing boxes all over the place,” he says, and for the next ten days he assisted Smith and Aileen in getting ready to go to Minamata. “When they left, I told Gene, if you need help when you get back to Tokyo call me.”

Within two weeks Smith was back in Tokyo. He enlisted Takeshi’s help once again, this time to print contact sheets. “After only two weeks Gene already had many rolls of film. He made the developer himself, but needed me to print for him”. With limited space and funds, Takeshi created a makeshift darkroom and printed long into the night returning to his home only for sleep, before starting again.

After a grueling workload there was respite in sight; Smith and Aileen were heading to Minamata again. Takeshi says Smith had asked him numerous times to come with them, but Takeshi was acutely aware that he wouldn’t be able to earn a living in Minamata, and that Smith had no money.

“I took them to the station and I’m saying goodbye to Gene and the train is starting to move and he’s holding me.” He pauses to show me how Gene had grabbed him.  “And I’m like no, no, I must go. But he held on to me and after 17 hours we arrived in Minamata.” He laughs at what is now a fond memory, but at the time Smith’s actions were somewhat disconcerting for the 21 year old.

Resigned to his fate, he rationalized it was only for three months and threw himself into the adventure. “We arrived in Minamata and I stayed in a house with Gene and Aileen, an old style Japanese house. There was only one mattress so on the first night we had to share, with Gene in the middle.” After all these years his embarrassment at this memory is apparent and he quickly adds that Smith bought another mattress the following day.

For the next three years Takeshi worked with Smith on Minamata spending most of his time in the fishing village. There he printed hundreds of photographs in a darkroom hastily erected in the bathroom where using the toilet became an exercise in contortion, so cramped was the space.  Money was tight too and while Smith sold images to Life, which helped to fund the continuation of the project, there were many lean periods when Takeshi worked for room and board only.

“The first time I went to Minamata I didn’t shoot, I was the assistant, and I wasn’t that interested in the politics. But the next visit Gene gave me a handful of rolls of film and told me to shoot. He encouraged me to photograph patients on my own, he was insistent. So when I had time I started to take photographs.”

Takeshi amassed a collection of images, which lay at the bottom of boxes until 2008 when a retrospective of Smith’s work reignited his interest in the topic. “Seeing this exhibition made me realise I wanted to see Minamata again. When I was working as Gene’s assistant I was young, and didn’t realise at the time that this was my project also”. He went back to Minamata and reconnected with a patient he had met 30 years earlier. From there it didn’t take long to consolidate his idea to photograph the same person and place 30 years on. “And that’s what my book, Minamata Note, is about. This is Minamata now”.

Minamata was Smith’s last photo essay, and one that nearly killed him after men employed by Chisso savagely beat him leaving him with impaired vision in one eye and a litany of ailments. But Smith was determined to tell the story, one that Takeshi says isn’t over.

While Minamata Note is written in Japanese, the images speak for themselves and Minamata Note is both documentary and personal in its style. In the years that Takeshi shared the Smiths’ lives he also took photographs of the pair working together, as well as Smith with many of the victims and the book reveals poignant, often evocative scenes that have never been published.

Currently Takeshi’s work from the book is on exhibition in Minamata at the Minamata Disease Municipal Museum.