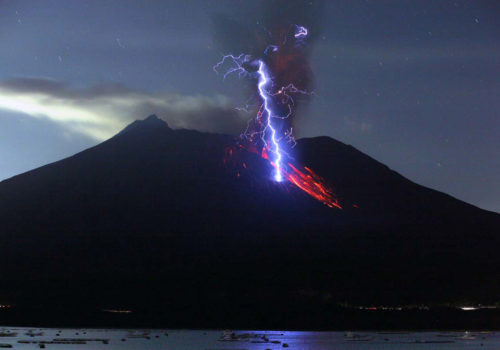 Takehito Miyatake’s work explores the interplay between what he describes as the “light of Japan” and the natural landscape, and the connection between land, water and sky. His noted series of photographs of the Sakurajima volcano taken while it was erupting are shown along images of tranquil water bays with rocks and boats reminiscent of Japanese scroll paintings, a bridge surrounded by streaks of light produced by the glow of fireflies in flight, a wooded area with bursts of light glowing like lanterns, a moon rising above black lava rock, and a star trail rendered in concentric circles that shows the spinning motion of the Earth.

Miyatake draws inspiration from contemporary waka poet Utsubo Kubota. Waka is a form of classic Japanese literature that traditionally reflects the human heart’s response to nature. Miyatake’s work reveals his passion for his homeland that is still recovering from the devastating Tohoku earthquake and resulting tsunami of 2011. His use of color and light celebrates the mystical beauty of Japan’s landscape.

Nikkei National Geographic Inc., a joint venture of The National Geographic Society and Nikkei Business Publications founded in 1994, sponsors the Nikkei National Geographic Photo Prize. The mission of the prize is to showcase and raise the profile globally of promising photographers from Japan. Prize entrants can submit work under the categories of the “natural world” or “people and communities”. The work is judged for its aesthetic appeal, and most importantly, the photographer’s knowledge of his subject and ability to communicate through the medium of photography in a manner that evokes a sense of wonder and discovery, excitement and inspiration to a diverse audience internationally.