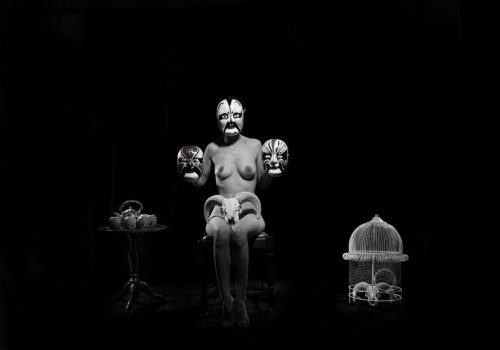 Originally from China, photographic artist Tami Xiang now lives in Perth in Western Australia. She says starting her new life in a foreign country prompted her to think more about the culture she had left behind.

“There was something in my blood about my culture that I felt very emotional about, but it didn’t really come to me until I was in Australia. I began to think about how difficult life was for women in the old days in China, especially compared to today where we have so much freedom. I didn’t want people to forget that.”

Her series Nüwa Re-Awakening draws on the ancient legend of the Chinese Goddess Nüwa who was worshipped in a time when women were revered and powerful. “Nüwa was the person who created humans and she was worshipped by all people and held a very high position in ancient Chinese culture. Women were treasured and treated well and were considered higher than men. But that changed and in Nüwa Re-Awakening I’ve imposed my feelings to show my rebellion against the oppression that became part of Chinese culture and that lasted for centuries”.

While it sounds like a feminist stance Xiang is quick to refute that notion. “It’s not about feminism, but more about something that existed in history. I wanted to preserve that for future generations. I don’t want people to forget about how women were treated”.

In Nüwa Re-Awakening Xiang combines traditional Chinese masks with the naked female form to express her recognition of her culture’s art and her rebellion against male domination. She says the masks point to women being invisible in the culture and also in marriage; the mask in this instance is symbolic of arranged marriages where the woman doesn’t see or know the man she is to wed. Here the mask represents an uncertain future, as well as concealing the woman’s true nature.

“I also chose to incorporate nude as one of the principle elements, as it symbolizes the vulnerability and helplessness of females living in a society where control is paramount. The nude is also a taboo subject in ancient conservative China and so it is also symbolic of my rebellion and rejection of the feudal system of control. It’s a story of one woman, but also reveals the fate of many millions of women without freedom and rights in the ancient days.”