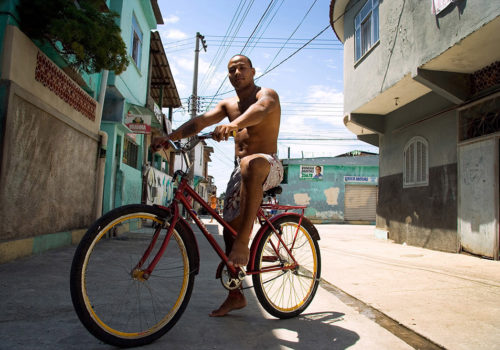 Melbourne photographer Nicola Dracoulis’ exploration of nine young people living in Rio’s favelas is gripping. Shot in 2006 and 2013 in this series of portraits Dracoulis revisits the same people seven years apart capturing both the changes in individuals and their habitats.

In 2006 Dracoulis was living in London working on her Masters of Photojournalism. “I was looking to do a positive story based around a group of people doing something born out of adversity,” she explains. “I found AfroReggae a cultural group working with communities in the favelas in Rio and asked if I could meet some of the young people they were involved with.” They were agreeable and after negotiating access Dracoulis flew to Rio and spent six weeks visiting the favelas escorted by various members of AfroReggae.

We’ve all heard stories about the favelas and their inherent dangers. I ask Dracoulis what her experience was like and if she was concerned at any point for her safety. She is quick to point out that having local support was essential in gaining access and staying out of trouble.

“When I first went to Rio it was more dangerous because of the places I went and the wars that were going on between the favelas I was photographing in. My contacts at AfroReggae talked to the local drug dealers so they knew I was coming. I was given access because I agreed not to photograph any one with a gun – I saw a lot of people with guns – but as long as I focused on the young people and not the illegal street activities, I’d be okay.” Dracoulis got through unscathed but she was also very aware not to push her luck.

Originally the idea of revisiting the story wasn’t part of the initial concept, but as the World Cup and Olympics began to put Rio and its favelas under the global spotlight, Dracoulis’ thoughts turned to those she’d met in 2006 and she wondered what was happening in their lives.

Returning in 2013, she found the situation somewhat diffused in comparison to her earlier visit as the wars between neighbouring favelas had ceased after a takeover by one of the crime syndicates. There was less tension on the streets and residents seemed more relaxed.

Dracoulis says she enjoyed reconnecting with those she’d photographed seven years earlier and discovering the changes in their lives. “Doing this project has had a profound affect on me. I found it really inspiring to learn about others’ lives and the people I met were so warm and welcoming”.

It is the acceptance of other cultures and the recognition and celebration of differences that Dracoulis hopes her audience walks away with. “I hope those who visit my exhibition learn something new about people in the world and about growing up in the favelas and how things can change over time,” she concludes.

EXHIBITION
Viver no Meio do Barulho (Living in the Middle of the Noise)
by Nicola Dracoulis
Part of Head On Photo Festival
29 May to 9 June, 2014
Gaffa Creative Precinct
281 Clarence Street
Sydney
Australia