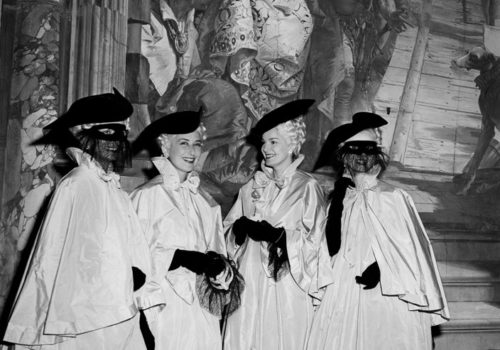 Willy Rizzo exhibits the most glamorous Venetian balls and the staging of Charles Perrault’s Tales to make us dream and usher us in the year 2022 in style.

The art gallery of the unconventional Italian who excelled in glamor, combining a career as a photographer of personalities with the design of original, exclusive and handcrafted furniture, created a new exhibition on the theme of flamboyant Venetian balls and Tales of Charles Perrault with extras from the Comédie Française.

Since the 1940s, Willy Rizzo has been able to capture the movement of a dress, the candor of a look and the modernity of an era;

“The photographer of the beautiful people” has masterfully portrayed the evolution of customs and fashions through his iconic photographs. In 1970, he started designing furniture that was elegant, sexy and functional. Rizzo often cited the influence of his close friend Le Corbusier.

For Willy “It was never about recreating classic styles in modern furniture, that was not the point. It was about creating something new in a traditional context. ”

This new exhibition show us two culturally and emotionally rich themes, as well as previously unseen excerpts from Italian and French history.

Through his photographs, Willy Rizzo stages the extras of the Comédie Française wearing costumes borrowed from theater wardrobes. The large format shots with a Linhof camera, taken in the Rambouillet forest in December 1959, plunge us into Rizzo’s fantasy world, which illustrates Charles Perrault’s most emblematic tales.

“For these eight productions, I borrowed costumes from the Comédie Française, asked extras to pose, used a 20×25 inch camera and to illuminate I needed several light sources. Jean Demachy, who was artistic director of Marie Claire at the time, helped me a lot. ”

The Venetian balls of philanthropist Charles de Beistegui and Count Volpi, as well as Elsa Maxwell’s ball in Biarritz, majestically marked an era of whimsical pleasures, sumptuous luxuries and cultural salon in memory of times gone by. The elegant collection of photographs on display at Studio Willy Rizzo immerses us in the exclusive world of high society.

This eclectic mix of culture and society makes accessible the transience and legend of these two fascinating worlds, the theater and the international aristocracy.

All the photographs, like the furniture, are numbered and signed by Willy Rizzo.