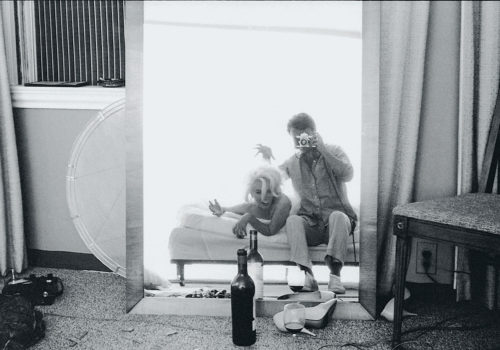 The legendary photographs of Marilyn Monroe from Bert Stern’s “The Last Sitting” are the subject of this exhibition at Staley-Wise Gallery. Indeed, very few photo shoots are legendary, one above all the others checks all the boxes : Marilyn Monroe and Bert Stern at the Bel Air Hotel for VOGUE in 1962.
This is why we dedicate today’s entire edition to this true gem which would be without doubt impossible to create today, told in the words of Bert Stern.

Bert Stern’s contract at VOGUE allowed him to photograph 10 pages of his own choice in the magazine. He chose to photograph Marilyn and the shoot took place at the Hotel Bel-Air in Los Angeles in June 1962. Marilyn died shortly after on August 4, 1962 at the age of thirty- six and these photographs became known as “The Last Sitting”. In the intervening years her considerable fame has taken on mythic proportions, and it has been photographs which have fanned the flame of her celebrity.

This exhibition is comprised of 60 photographs selected and printed by Bert Stern in 2007 immediately following the success of the exhibition “Bert Stern: La Dernière Séance” in 2007 at the Musée Maillol in Paris, France – the first solo museum exhibition by the photographer.   The works in this exhibition at Staley-Wise Gallery then travelled to the Instituto Rio in Rio de Janeiro, Brazil (2007), Centro Cultural de Cascais in Portugal (2011), the Forte Di Bard in Valle d’Aosta, Italy (2012), and The Musée Toulouse-Lautrec in Albi, France (2015). This is the first time that these works have been exhibited collectively at Staley-Wise Gallery and the exhibition commemorates the 60th anniversary of when they were taken.

The photographs of Marilyn Monroe turned her into the universal icon she has become, and the desire to see more imagery seems unstoppable. From LIFE to VOGUE, and from unknown press photographers to the acknowledged geniuses of the profession, each has captured an aspect of Marilyn and this work has gone to the heart of a vast public. She gave her time generously, perhaps on some level knowing this was the true route to stardom, following the example of Garbo and Dietrich, whose photographs by Hurrell, Bull, and others synthesized their allure and popularized their image.

Bert Stern began his career as a mailroom boy at Look Magazine. The launch of his career would coincide with his iconic and legendary campaign for Smirnoff Vodka in 1955. With the brilliance of that work, he became a star in the world of advertising. Editorial work followed and working for VOGUE put Bert Stern at the pinnacle of his career in the 1960’s. Sought-after by Madison Avenue, Hollywood, and the international fashion scene for decades, Stern became the prototype of the fashion photographer as the embodiment of glamour- a legend himself.

The photographs are for sale individually and the complete collection is available for $1,000,000.