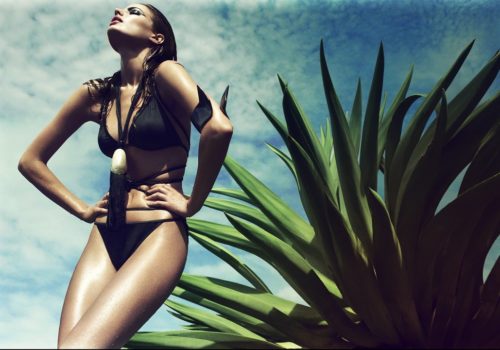 The Saint Barth Photo Festival is in the last stretch of its opening parties that started on November 23rd, hosted by some of the best Five-star hotels on the Island of Saint Barthelemy. The festival will shine bright on December 01st with Greg Kadel and his exhibition Plein Soleil at Le Manapany.

The US-born photographer and filmmaker frequently plays with lighting and shadow in his works to create visually striking images with powerful contrasts, lines, and often emphasized or clean-cut silhouettes. Kadel uses shadows to accentuate the body and create an intense sense of drama in his photographs, creating images that put high fashion on the theatrical stage.

A common feature of Kadel’s works is his use of color, as he employs extremely deep tones of bold color to create richness in his images, evoking a sense of intensity and attitude within his works.

Kadel has an extensive repertoire of commercial clients with whom he has worked, and his works have also featured in numerous publications around the world.

With Plein Soleil, Greg Kadel pushes the intensity to the max with a mix of glamourous yet sophisticated images. Featuring Black and white photos of models seductively enjoying the heat of summer and a choice of pictures with saturated warm colors, almost as if the sun had burned the film, the selection brings a palpable sense of tropical excitement.

While the events are about to end, this exhibition of images is a reminder that the season in Saint Bart is just starting. So is the Festival as the photographs will be exhibited until December 30th in each of the ten Five star Hotels.

For programming details, more information about the artist and the artworks, visit www.sbhartweek.com and follow @artweeksbh.