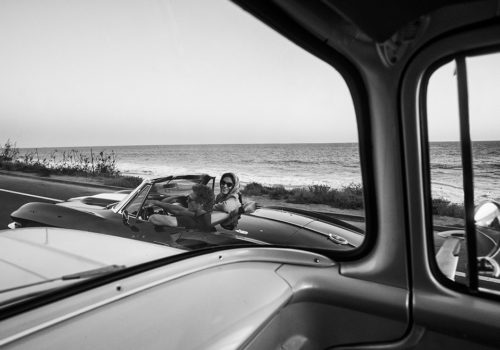 Saint Barth Photo Festival, the first dedicated to photography on the Island of Saint Barthelemy, is continuing its opening parties roll out on an intense daily cadence that offers a unique immersion into the world of each photographer invited. The exhibitions, presented in ten Five Star Hotels on the Island, will be on view until End of December.

On November 28th was the opening night of Brian Bowen Smith at the Carl Gustaf. The American photographer is presenting two exhibitions. The first and central show, entitled Drivebys, displays a series of time-altering photographs captured from the driver’s seat of his vintage truck. The second exhibition entitled Angels features delicate images of ethereal forms appearing almost in motion or transformation.

The two exhibitions show a more reflective aspect of the photographer’s work. He particularly treasures those two series resulting from fate and surrender to the unexpected and mirror the artist’s own journey.

Drivebys presents a series of glossy, black, and white cinematic stills that feature a sequence of locations and characters on the road. It was shot during the pandemic when the artist could not stand still at home and started with no initial plan to take pictures of people from his truck. Social media and his readiness to tour the United States created magic encounters in the atmosphere of seclusion of the pandemic across an array of spectacular locations as mountains, oceans, and the New York City skyline.

Angels, also captured in Bowen Smith’s signature black and white palette, experiments with time and shutter, creating supernatural, aura-catching images. With soft, flowing forms abstracting the figures into ethereal impressions of the body, they reveal more than our human form with a manifestation of our surrounding energy and guardian angels. “For the Festival, I wanted to show some pictures that were different from fashion, so that there could be a nice eclectic group of artists getting together and sharing different types of photography. I am very grateful to all the people who organized this Festival, especially Antonio at the Hotel Carl Gustaf” shared Bowen Smith.

Similar to the two series presented, the New York-born photographer Brian Bowen Smith had a unique introduction to the world of photography and began his career through an alternative path. Bowen Smith was performing in a print campaign as a pro athlete when he caught the attention of legendary photographer Herb Ritts, who became his mentor and friend. Bowen Smith has mixed his strong technical mastery with his contagious lust for life to create images that can be seen in numerous publications and art exhibitions.

The structure of the St Barth Photo Festival transports every event attendee into the realm of the photographers, enabling direct access to each of them. Bowen Smith’s energy was palpable through the numerous stories he shared behind each image for the joy of his listeners.

For programming details, more information about the artist and the artworks, visit www.sbhartweek.com and follow @artweeksbh.