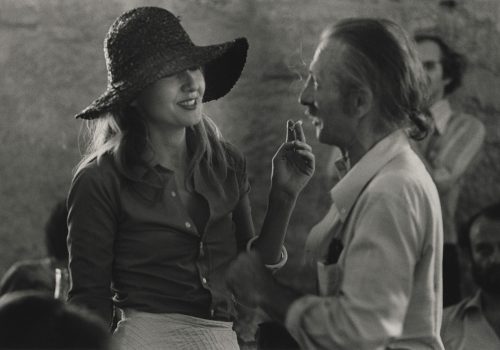 Jean-Philippe Charbonnier : Is one of the greatest among the French photographers, one of the most unknown too!

An exhibition of his work opens today in Montpellier produced by Emmanuelle de l’Ecotais and Gilles Mora.

We dedicate this day to him with, as an introduction, this text by Agathe Gaillard with whom he formed in the 1970s and for 10 years one of the mythical couples of French photography.

Finally, thanks to Isabelle Sadys from the Gamma Rapho agency, she is the one to whom we owe the realization of this day.

I was fourteen, I was coming back from high school. It was in Nîmes. I had a pale gray coat and woolen socks. I saw a busy 2CV stop in the middle of the street. A man got out, leaving the engine running and the door open. He went very quickly to the tobacco shop . I don’t know if it was to buy tobacco or newspapers. When he came out, we crossed paths, three meters apart. We looked at each other. I thought: I have never seen a man like him, there is no man like him in Nîmes. If I had been told: one day you will marry him, I would have been extremely surprised. It was Jean-Philippe Charbonnier.

Subsequently, I came to Paris and I worked at the bookstore-gallery La Hune, in Saint Germain des Prés, in the arts department. I met a lot of artists and people who were interested in art, in various capacities, including Jean-Philippe Charbonnier. I did not recognize him. It was him, after some time who said to me (the photographer’s eye): I already know you, I saw you in Nîmes. He told me about the scene, which immediately came back to my memory very precisely.

With him I learned what a photographer was, the one who sees, who senses, who deciphers, who guesses.

After I was not afraid of any photographer (they easily scare people), I understood them all and almost loved them all

Jean-Philippe made a lot of noise, and antics, to better go unnoticed. He was raised by parents who had separated, a mother, Annette Vaillant, from the educated bourgeoisie, (her father and uncles, the Natanson brothers were art lovers, collectors and patrons, her mother, Marthe Mellot was a famous actress) and a father, Pierre Charbonnier, a painter, rather bohemian and decorator on the films of Robert Bresson. Having grown up in this double atmosphere, Jean-Philippe was at ease in all circles. He was not afraid of anything or anyone.

Naturally, like all photographers, he was very observant. Nothing escaped him, he guessed everything. In a restaurant, he guessed people’s jobs, and if they worked in a large company, an insurance company, for example, he knew what position. He said to me: “someone you cannot place in any profession, then, he’s a cop”

I have accompanied him on many trips, I followed him when he was working and I watched passionately how this profession of photographer is practiced. I saw the expectation, the acute observation even if it is invisible, the intuition that something could happen

I could see how, from an everyday reality, a photography emerged fleetingly, the moment when every details, miraculously, made sense.

His way of looking at people, was sometimes find acerbic and merciless, at first glance, but he was kind. Maybe he was kind when he felt that these people could be the subject of a photograph and he was grateful to them….

Among all these photographs, I particularly like, which upsets me, the one of the “son who dances with his mother” Bal à Aubusson, taken in 1959. In this popular ball, they seem to have very few friends, they are not beautiful, nobody would want to dance with them…. But it’s still a woman, it’s still a young man. They are moved, intimidated, but happy.

At the end of his life, one day when I complained about the lack of grace of the outskirts of certain cities, invaded by warehouses and ugly constructions, he said to me, pensively: “Nothing is ugly”

Jean-Philippe taught me everything about photography and about his prestigious colleagues. I was surprised that these people, whom I found admirable, are so often considered as illiterate or thugs. They were authors, it was not the camera that took the photos the took the picture, and some were great artists. I felt I had to “do something” for ” the recognition of photography as art”

Jean Philippe understood and encouraged me. He helped me create this gallery, rue du Pont-Louis-Philippe in 1975.

In 1978, we separated. It was sad, but we had created what fate had in store for us.