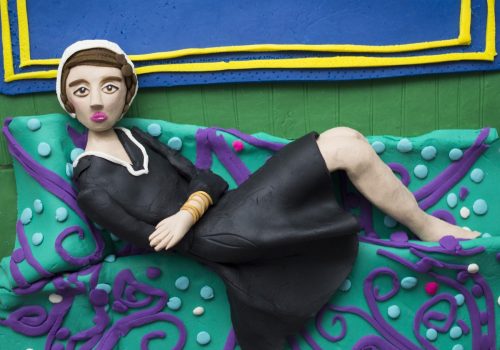 The project Photographs Rendered in Play-Doh, by Eleanor Macnair, started on a whim in August 2013 following a photo quiz in a pub in Brighton, UK. One of the rounds was to make a reproduction of a famous photograph using Play-Doh. Sofas, Birds and Knees is her last series.

Sofas, Birds and Knees is my strange journey through photographic history. I gather image files from the internet like a Magpie, hoarding them to recreate in play-doh at a future date. Since I began Photographs Rendered in Play-Doh I have found myself attracted to photographs containing certain objects, animals or body parts and patterns have emerged. I wished to explore this further and the idea for Sofas, Birds and Knees evolved. The photographs are grouped not by genre nor maker nor time-period, but by common and recurring themes. It is perhaps, I realised later, a poor man’s version of Geoff Dyer’s The Ongoing Moment – in play-doh.

I am drawn to photographs with subjects sitting on sofas as these tend to fall into two categories. These sofa pictures either show intimate portraits of the subjects in their natural environment, deep in introspection, bored and indulging in mundane activities, or formal portraits where the photographer has placed the subject on the sofa. I have a simple love of birds, and the reason why is probably best expressed by the American writer J.D.Salinger “[Y]ou’re someone who took up birds in the first place because they fired your imagination; they fascinated you because ‘they seemed of all created beings the nearest to pure spirit- those little creatures with a normal temperature of 125°”. The knees series was born from the number of comments I get when I post my works on the internet and viewers comment on the knobbly knees – time and time again. There is a certain vulnerability in the human figure, whether it be child or adult, with visible kneecaps.

The exhibition does not claim to be an authority on sofas, birds and knees in photographic history – rather a brief and eccentric tour – hopefully tempting the viewer on to explore further.