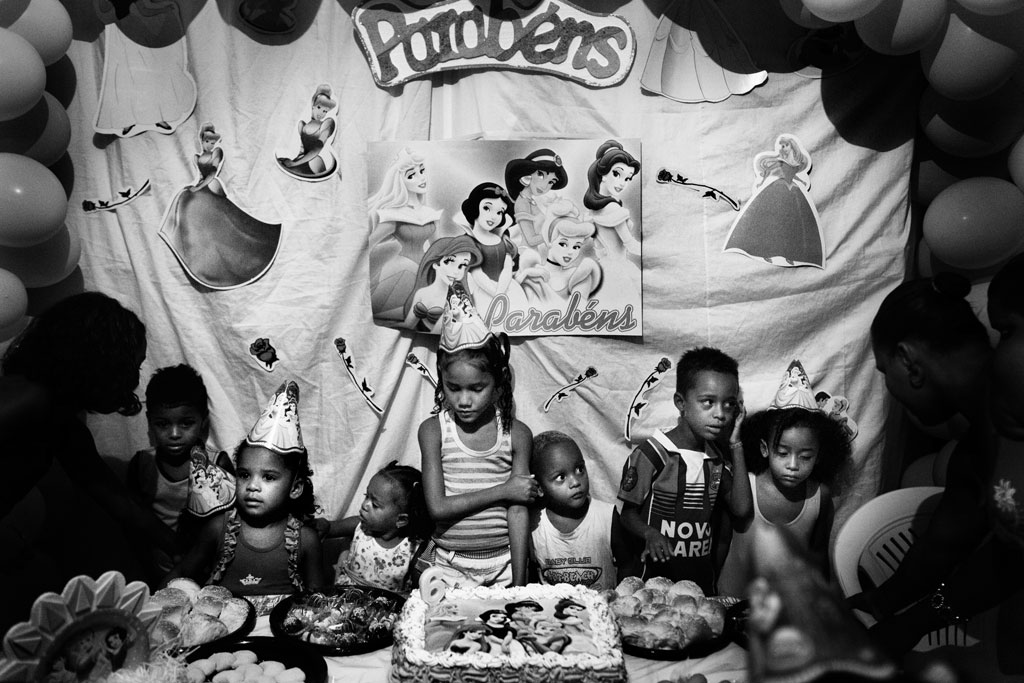 Urban Quilombo
Over a period of eight years, about sixty families occupied Salvador de Bahia’s former chocolate factory. All of them were homeless and together they transformed what was left of the old factory into a “home“. When Sebastián Liste discovered this place, he understood its uniqueness. Within the city, this underground culture and microcosm where issues such as drug taking, prostitution or violence are addressed by the collective ; its shielding of itself from a society which kept its members at arm’s length, reminded him of his academic sociology studies and other community experiences when the goal of living in a group is simply survival…

Sebastián reported on this unlikely place until March 2011 when families were eventually evicted by the government. Because Brazil is getting ready to host the Football World Cup and the Olympic games, which are the two most heavily covered media events worldwide, the state decided decided to clear and tidy up its city centres. Exit the overly visible favelas whose inhabitants are often expropriated with little respect for human rights. Since being evicted, families from the chocolate factory have moved to “Jardim de Margarida“ an underprivileged district in the outskirts of Salvador.  In the Urban Quilombo series,Sebastian empathizes with these families, he respects them and is respected in return in this improbable “Court of Miracles” and his intesely dark photographs reflect this!

Sebastian Liste was born in Alicante in 1985. He studied sociology and journalism in Barcelona. For several years, he pursued a long-term project called, Urban Quilombo, where he shared the extreme living conditions of tens of families holed up in an abandoned chocolate factory in Salvador de Bahia in Brazil. He was awarded the Ian Parry 2010 prize for that project and he was also chosen for the 2011 edition of the World Press Photo Joop Swart Masterclass in Amsterdam.

Aquí, junto al agua. Nicaragua is a photographic saga. Eighteen years of work, during which Rafael Trobat attempted to draw the portrait of this Central American country, i.e., Nicaragua. This began at the end of the Sandinista popular revolution that saw the transition towards a neoliberal regime. This was a crucial moment in the country’s history. Everything can be found in a country where the water seems to be at the source of all geography. There are the scars of war, the rich and the poor, the many poor. The narrative of Rafael Trobat’s story is based on everyday life, on religious celebrations, and on natural disasters which have also written the recent history of the country. His images are taken at perfect tempo ; children diving into the sea, couples kissing… They are geometrically framed and bathed in mesmerizing black and white. The pictures take us to a romantic, satiric, cheerful or even sad world, a country, which is life itself, and where death sometimes invites itself. Rafael Trobat’s work is rooted in the great Spanish tradition of humanistic photography.

Rafael Trobat was born in 1965 in Cordoba (Spain). In conjunction with his work as an independent photographer, he teaches photography at the Madrid faculty of the fine arts and at the University of Segovia. Between 1990 and 2005, he was the assistant and the associate of the photographer Christina Garcia Rodéro. His work was rewarded in 1994 by the Banesto foundation, and he was awarded the Madrid Caixa and Caja foundation prizes in 1998 and 1999.

El Norte
The border between the United States and Mexico is 3000 km long and goes from the Pacific Ocean to the Atlantic Ocean. News regularly bring to light the immigration issues that crystallize along the border but the reality goes beyond these surroundings. Late 1994, the NAFTA (North American Free Trade Agreement) was effective. At the same time, the Operation Gatekeeper aimed to halt illegal immigration via the United States-Mexico border by fortifying it : a wall has been built to materialize the border in the urban zones nearby, the number of employee working on the border increased, high-tech monitoring and detection systems have been set up.  Cradle of mondialisation, delocalisation, social and urban violence, the border is also a cultural entity with a deregulated and predatory economy that plays the informal economy related to drugs trafficking. It’s a third country between two nations, two powers that history and geography condemned to a common destiny for worse, most of the time, but sometimes for better.

Patrick Bard was born in 1958 in Montreuil-sous-Bois (France). As well as being a photojournalist, a thriller and travel writer, his subject matters include suburbs, roads and borders. His long photographic essay on the united-States-Mexico border earned him immense acclaim, and his work was exhibited in the Georges Pompidou Centre, in the Hall of La Villette, as well as Mexico,Spain,England and in the United States. With his wife Marie-Berthe Ferrer, he has travelled the length and breadth of Latin America for several years. Together they published a retrospective work of photographs, texts, and travel diaries called Partir, traité de routologie [To leave, road-ology treaty] at Editions du Seuil in 2011.