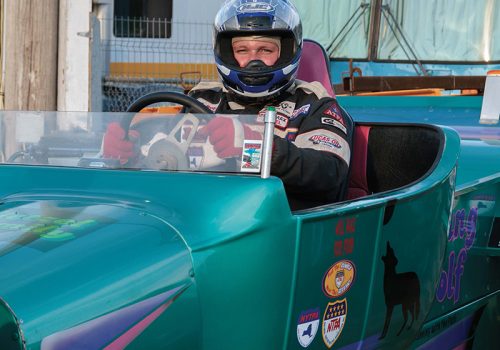 The Grand National held at the Saint-Hyacinthe agricultural fair is the most important truck and tractor pull event in Canada. Three days of competition, 20,000 spectators, 60 or so pullers from all over North America and next to nothing to win except for the applause of the crowd. Originally developed by farmers to test the power of their horses, the sport is historically tied to the reality of rural labor and to the working classes making up its audience. With the motorization of farming, the deep knowledge of all things mechanical has replaced that of the animals and became central to the masculine identity the contenders perform. That expertise is challenged in a competition where feats of strength, racing aesthetics and deafening noise meet the smell of diesel and the fruit aromas added to the methanol. Grand National photographs immerse viewers in this major event of the North American agricultural world, where strong bonds are created between humans and machines.

Serge-Olivier Rondeau has training in filmmaking and in sociology and is currently a Ph.D. candidate at the University of Ottawa’s School of Sociological and Anthropological Studies. His practice-based research brings together ethnography and media arts to record different types of assemblages between humans and other-than-humans (animals, landscapes, machines, plants, and so on). His films, photographs and installations explore the multiple dimensions of the worlds and modes of existence that emerge from these hybrids.

His work has been shown in Canada, England, France and Italy. He’s participated, among other things, in the Manif d’art 7 in Québec City (2014) with the group Épopée and in the Mois de la Photo à Montréal (2016) around the theme “the post-photographic condition” curated by Joan Fontcuberta. As part of this biennale, he presented at the McCord Museum a nine-channel video installation, In loving memory <3, with the collective After Faceb00k, of which he’s a cofounder.

Stéfanie Vermeersch is an artistic director and a multidisciplinary designer. Trained in environmental design and graphic design, she works at the intersection of objects, print and space. Her creative process is guided by the search for accessible and simple context-driven solutions.

She’s been working independently since 2017, and loves to collaborate with clients dedicated to culture, education and research. Her work includes the design of the Université du Québec à Montréal 50th anniversary pop-up store, the signage system for Cégep de Saint-Laurent and the graphic design of the new permanent exhibition of the Société de développement culturel de Terrebonne. She’s also designed publications such as exhibition catalogues for l’Archipel and the UQAM School of Design, and the Grand National photobook.