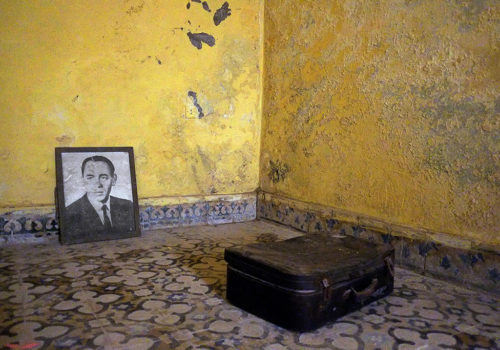 The Arab Spring protests that first took place in Tunisia, marked the prelude to vivid uprisings. They resulted in political disputes far from the idealistic and liberal aspirations. In the midst of social and political transitions, young Arabs continue to affirm their oppositions and resistance to secular and corrupted governments. The series “Mectoub” or Mektoub, it is/was written in Arabic translates Scarlett Coten’s interest in post-Arab Spring movements.

Featuring over thirty photographs, Coten re-creates intimacy by isolating her subjects in chosen spaces, often unoccupied, and invites them to share their stories. “The idea is to create a space of intimacy in which they will feel relaxed and free enough to reveal something of their inner selves, their personality, their sensitivity, their fragility or their sensuality” states the photographer.

Scarlett Coten is a photographer who lives in Paris and works in North Africa and the Middle East. After studying photography at the ENSP in Arles, she is regularly published in the national and international press.

In 2000, Coten achieved her first photographic series in the Sinai desert, Her full immersion in the Bedouin society, during almost 3 years, and her attachment for the people and their story, give her work a unique and remarkable intimacy. In 2004 it was awarded the Humanity Photo Award in Beijing, China, and in 2009 nominated at the NYPH Festival in the Book category.

Since 2012, Scarlett Coten captures men in Algeria, Egypt, Morocco and Palestine, particularly the young urban generation who, since 2011, not only demand more individual freedom, but expose themselves to the intimacy of a face to face, and challenge the western world vision we have of the Arab man.

“Mectoub” was made possible thanks to a carte blanche given by Mr Jean-Luc Monterosso for the PhotoMed festival (France), and thanks to residencies supported by the French institute of Tangiers and Fès (2012), Cairo and Alexandria (2013), and Ramallah (2014).