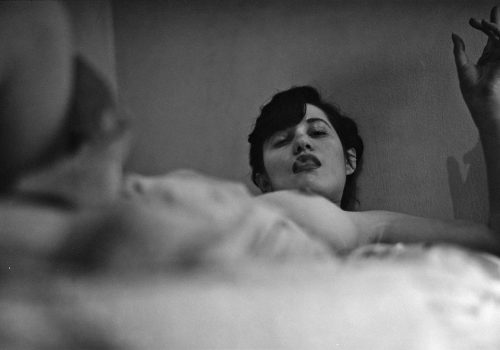 The new three-part exhibition, Nudes, is the first presentation in the history of the Helmut Newton Foundation in Berlin dedicated exclusively to the genre of nude photography.

The naked body has been a theme in art since the famous Venus of Willendorf, which was crafted around 30,000 years ago by an unknown artist. Nudes also featured in the pioneering years of photography, the oldest of the new media, as early as 1839. Since then, a special combination of exhibitionism and voyeurism has evolved before the lens of thousands of photographers – more realistic at times, more staged at others. The three photographers presented in the exhibition count among the most empathetic and influential nude photographers of the late 20th century.

Today, we present the third and final part of the exhibition: Saul Leiter.

Saul Leiter (1923–2013), parallel to his fashion photography for Harper’s Bazaar and the colorful abstractions he captured on the streets of New York from the late 1940s onwards, also photographed nudes in the studio. These quiet, intimate black-and-white photographs, which Leiter developed himself in his darkroom, were kept under lock and key during his lifetime; only a few friends knew them. His female models were friends or lovers whom the artist portrayed in the everyday setting of his New York apartment; they were not professional nude models. As if in an act of conspiracy, they joined the photographer in playful collaboration to challenge the dualistic principle of voyeurism and exhibitionism.

Following Leiter’s death in 2013, his multifaceted artistic legacy has been re-examined and more widely published on the initiative of Margit Erb, director of the Saul Leiter Foundation. In spring 2018, In My Room, a book featuring Leiter’s nudes, was published by Steidl; in summer of 2018, Howard Greenberg Gallery in New York showed a new selection of his nudes. Now this autumn, the Helmut Newton Foundation is showcasing for the first time more than 200 vintage and late prints of Leiter’s nude work, which until recently was relatively unknown.

While about half of the selection on display is framed and on the wall, the other half is presented in an exhibition vitrine as snippets, fragmented by Leiter himself. These tiny gelatin silver prints, with their jagged edges and amorphous shapes, are almost like a second exhibition in miniature. Also on display is a ten-part series of timeless color shots of a half-nude young woman on the terrace of a house by the sea, taken in 1958 in Lanesville, Massachusetts, as well as 15 of Leiter’s hand-colored, black-and-white prints in various formats, which reflect his intensive relationship with the medium of painting. In this part of the exhibition, we encounter small-format nude portraits depicting one or more women as they recline on sofas, become silhouettes against the light, seem lost in thought with a cigarette in hand, casually dress or undress, and pose for Leiter’s camera with a smile or seduction. Not all of the women are naked, but surprisingly this hardly makes a difference. They all reflect the photographer’s subtle, sensitive, almost shy approach to the female body and spirit.