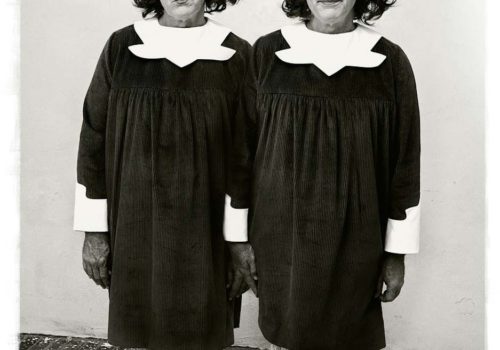 Old friends Sandro Miller and John Malkovich have worked together for 17 years. Two years ago, Miller, wanting to pay tribute to his mentor, Irving Penn, came up with the idea for the photo of Truman Capote. Malkovich loved it. The story continued with recreations of 40 iconic photographs from the history of the medium, each one more astonishing than the next. They will be exhibited from November 7th to January 31st and the Catherine Edelman Gallery in Chicago.

“I began working with John Malkovich more than 17 years ago, when he was an ensemble member of the world-­‐renowned Steppenwolf Theatre Company. I met John during a photo session, and we’ve been friends and collaborators ever since that initial meeting, creating 120 portraits to date. His belief and trust in my work is unprecedented, granting me many opportunities to work with him. Over the past 17 years I would approach John with various personal projects, ranging from short films to photographic stories. He has never said no, and has always been open to my ideas. For me, John is a beautiful clean canvas ready for paint. He is extremely open minded, never fearful and always willing to go to places most actors of his caliber would avoid. He is a genius willing to take chances, with a talent that allows him to become anything I ask. His willingness to play dress up, and become the subject of some of the most iconic images from history, is a true gift.

It was after another one of our long days working together that I realized just what a genius John was. Two years ago I wanted to pay homage to Irving Penn, my mentor. I looked at John and it came to me that he looked a bit like Truman Capote. I decided to pay homage to Irving by recreating his photograph of Capote in a corner. The result was astonishing and the feedback on the work was so overwhelmingly positive that I decided it would be a wonderful idea to pay homage to all the photographers that have influenced me over my 40 year career. The seeds of Malkovich, Malkovich, Malkovich: Homage to Photographic Masters was born.

Eighteen months ago I flew to France to see John, armed with a package of 30 iconic images by 28 master photographers, and to tell him about my idea for a new project. After consuming two bottles of wine with John, I showed him my idea and he fell in love. I chose John because deep in my heart, I knew he was the only actor who would be willing to morph into the numerous subjects portrayed in the original images. My biggest fear was that people wouldn’t take this project seriously. I didn’t want these to be a parody. I was serious about paying homage to these photographers and photographs that changed my perspective on photography. These images inspired me throughout my career and developed me into the photographer I am today. I wanted and needed to honor these great photographers. I needed the perfection of an actor who would put everything on the line. I watched John become a boy, girl, man, woman, Marilyn, Picasso, Hitchcock, Betty Davis and Che Guevara.

Once John agreed to collaborate on the series, I spent eight months researching every detail of the selected photographs. I hired stylist Leslie Pace to help me with all the wardrobes. I also collaborated with Randy Wilder, a hair and makeup expert, and Angela Finney, who is a set builder. Together, we dissected each and every photo down to the last detail so we could accurately pay homage to the master photographers who created these beautiful pieces. It was their passion for perfection and their brilliance that gave me the wonderful opportunity to recreate these images with John Malkovich. John is a pop culture icon. John does opera, theatre, has his own clothing line, and is one of today’s most sought after screen actors. He is brilliant and confident and willing to take risks. He was very involved with the styling of each character, often applying his own make-­‐up, and even made his own wax nose for the Salvador Dali and Picasso shots. He was very focused on perfecting the makeup for the Herb Ritts shot of Jack Nicholson as the joker. With makeup and styling taking at least two hours per shot, John would study the original photograph. You could see John working on his character, as makeup, hair and styling was being done. It was truly a joy to see such a perfectionist at work.

I want people to reexamine these iconic images and feel the strength, power and story telling that a single portrait can attain. These images are iconic because they invoke a feeling, thought or memory that is unforgettable. For me, these images were life changing, inspiring and just left me in awe. This is my way of saying thank you to the masters that created these amazing images.

I have been asked several times which shot was the most difficult to achieve, and I can honestly say that none were simple. All images took a tremendous amount of research, both with styling and lighting. Perfection was a must, and everyone working on the project had the same goal. It truly took a first class team to do a project like this and I thank all of them from the bottom of my heart.

Many people want to know which image is my favorite. First I must say that I’m in love with each and every one of these images as they have all moved me over time. Each of these images received every ounce of energy, passion and love that I had when I was creating them. It was important for me to give each master photographer his or her due. One image that particularly stands out for me is the Diane Arbus “Twins” shot from 1967. Arbus was brilliant in capturing these two beautiful twins one with the expression of wonder and fear while the other exposes a friendly excited state of mind. Both so different and unique. A bit eerie leaving the viewer wanting to know more of these two twins. John studied these two interesting sisters and became each of them. It was truly amazing to watch John morph from one to the other within seconds. Also the research that went into this particular piece was extensive. The dresses had to be made, the wigs needed to be made to fit John’s head and had to duplicate the style that these little girls wore. If you look closely at the set that Angela Finney built it is so close to perfection. In every aspect the shot is recreated in perfection to honor  Diane Airbus’s original.”