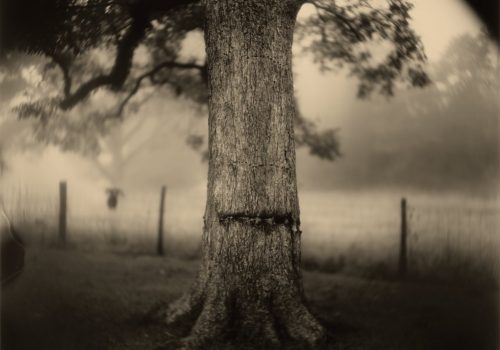 Sally Mann: A Thousand Crossings now on view at The National Gallery of Art in Washington (USA) is the first exhibition to encompass the full range of work by a woman photographer in the history of the Museum. Not since the 1987 Georgia O’Keeffe Centennial Exhibition and the 1992 Käthe Kollwitz’s retrospective has the work of a woman artist been treated with such profound respect.

Curators Sarah Greenough and Sarah Kennel have made a radical departure in their consideration of Sally Mann’s work, looking not through the lens of people – her celebrated family pictures that delve into the psychic complexities of childhood spring to mind – but through the lens of the land Mann inhabits in the Shenandoah Valley of rural Virginia as well as the land to which she has traveled to create her series Deep South, Battlefields and Blackwater.

Most of her well known Immediate Family pictures – Candy Cigarette, Night-blooming Cereus, Jessie At Five, Naptime, Hayhook, Sorry Game and Virginia At Six – are not included, replaced in the first room by lesser known family pictures including the exquisite Last Light and the unflinching Emmett And The White Boy.

This exhibition demonstrates the depth of Sally Mann’s work. Imagine Alfred Steiglitz without O’Keeffe, Robert Frank without the Americans, or Harry Callahan without Eleanor. The curators have succeeded admirably with their conceit and the exhibition flows magnificently like a fast, well-defined river.

Maria Morris Hambourg, the Founding Curator In Charge of the Department of Photographs at the Metropolitan Museum of Art, observed how photographers developed in their work, “You might see a photographer develop a single idea over a period of years or produce two or three accomplished, separate and distinct bodies of work,” she said, “Rarely do you see more than four or five.” With the National Gallery exhibition, Sally Mann has now exhibited eleven bodies of work, each to a greater or lesser degree emanating from the land of rural Virginia.

The exhibition includes three previously unseen bodies of work – Men, Churches and Blackwater – together with pictures of her daughter Virginia Mann and Virginia Carter, an African American woman known as Gee Gee, who worked for the Mann family for more than fifty years and whom the artist credits with raising her – “the best mother a child could have” – that comprise the fourth room of the exhibition.

Organized under the umbrella title Abide With Me, Sarah Greenough says that Mann wanted to address “the rivers of blood that African Americans had poured into this land as well as the courage they had displayed and the journey they had taken as they sought to escape slavery.”

Beginning in 1998 Sally Mann made unique 15” x 13 1/2″ tintypes of the Great Dismal Swamp and the rivers that feed it. “Rivers and swamps offered slaves a potential escape route,” says Greenough, but “they just as often found death, felled by panthers, venomous snakes and slave catchers.” Sally Mann has “created pictures of a hellish, apocalyptic world, one so threatening that only the most desperate and brave would enter.”

“Does the earth remember?” asks Sally Mann referring to her Civil War Battlefield pictures. “Do these fields upon which unspeakable carnage occurred, where unknowable numbers of bodies are buried, bear witness in some way? Death sculpted this ravishing landscape and will hold title to it for all time.”

Sarah Greenough reflects, “As she sought to reveal the violent histories that lay beneath the alluring beauty of the Southern landscape, she readily embraced the flaws of the wet collodion process, the scratches, pits and pealing emulsion caused by her handling of the collodion, as they added metaphorical resonance to her pictures.”

Much has been made of Sally Mann’s command of antiquated processes that Sarah Greenough views as deliberately ambiguous. “These beautiful, yet challenging photographs,” she says, “seem to slip in and out of time using 19th Century processes to raise contemporary issues.”

The shuddering core of Sally Mann’s work emanates from the land. After viewing a room of her large, luminous, Deep South prints, some made from collodion negatives, followed by a room of large Battlefield prints on soft paper from collodion negatives, and then the room with her Blackwater tintypes, it is apparent that Sally Mann has, in effect, reinvented landscape photography.

Sally Mann’s work was the lead for a November 1990 article entitled “Hot Photographers” published in Connoisseur magazine. “Sally Mann brought in her portfolio and we bought her work immediately,” said Maria Morris Hambourg. “Her carefully crafted, thought provoking images demand attention. Sally Mann’s photographs are made, not taken.” It was the first time Mann’s work had been published in a major national magazine.

At the close of the press opening, Sarah Kennel was standing in the fifth and final room, surrounded by Sally Mann’s astonishing self-portrait made up of a grid of nine 15 x 13 ½ inch ambrotypes, her proud, tender recent portraits of her husband Larry Mann and a ten-foot-wide triptych of faces of her children in extreme close up from the Sir Elton John Collection. “How did she get here from there? How is it that Sally Mann could make eleven intellectual leaps in the space of three decades?” Sarah Kennel simply shook her head. She did not have an answer. Such is the rare nature of genius.

Peter C. Jones is a documentary filmmaker, photographer, author and publisher. His next book Confluence, with an introduction by Laura Bidwell, will accompany his forthcoming exhibition at KMR Arts, in Washington, Connecticut.