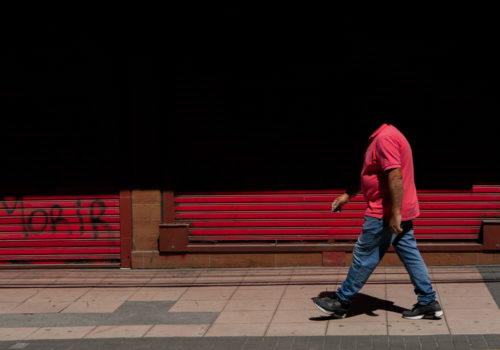 El rostro de la ciudad / The face of the city

Osoria tells us that he was born in the small town of Contramaestre, in eastern Cuba: “I come from a humble family, where the majority of them and the Cubans perceived Chile as a very civilized country with rich, sophisticated and noble people, which made it one of the five best countries to emigrate. I could never imagine being in this country, much less living and working. It was an impossible dream for a young man like me ”. In addition, he tells us that “apart from football, Neruda’s poems and some emblematic places such as the Atacama desert, he did not know anything about Chile.”

The visual proposal that he shares called “El rostro de la ciudad ´ / The face of the city” is part of a set of photographs taken in Chile in recent years that explore and make visible a cultural reality very different from its place. of origin, causing a “culture shock” in the artist. And in this context, for Osoria it was imperative to observe human behavior in a public setting with fresh eyes and to unravel a cultural contrast very different from that described in tourist guides.

The Face of the City represents for this photographer a kind of personal diary that records all kinds of things that he has encountered in his Chilean daily life, but also reflects the perspective of a Cuban photographer who lives in a completely foreign environment.

Finally, Ruber Osoria’s thoughts become plausible to the extent that quoting Neruda he told us “only with ardent patience will we conquer the splendid city that will give light, justice and dignity to all men”. Thus photography will not have sung in vain.

And he expands his reflection by stating: “I wander through the streets of the Bio Bio region (Chile) and I portray strangers, with such a narrow and futile scope of my photography as the lives they represent, like the lives of almost all of us. But I look for the hint of transcendence in the evanescent and the assiduous, in ephemeral gestures and glances, in transitory moments of connection in the urban flow, in the fleeting dance of lights, colors, shadows and human presence. In short, what moves me is to capture the infinitesimal external signs of an inner emotional life, the interiority of people even in the midst of the most public spaces. ”

“My photographs are traces of a transitory agglutination of photographer and context; me and the other. The city unites us, the city differentiates us. Shipwrecked in the flow of the subsistence of the metropolis ”.

Immersing myself in the flow of the life of the city, I feel that the limits of my self momentarily become fluid, permeable. I abandon myself to flow. The photographs that follow are both portraits of the people they represent, and portraits of a moment of being, a brief but charged crossing of lives. They are my weak protest against the forgetting of the city ”.