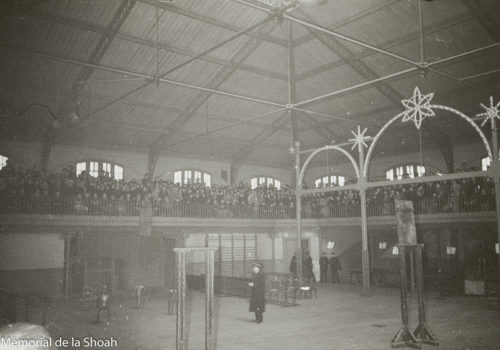 The Shoah Memorial announces the recent acquisition of five contact sheets, ie 98 photographs, of the Green Ticket Roundup. This unpublished report details precisely each step of the first mass arrest of Jews in Paris on May 14, 1941, 80 years ago, at the initiative of the German authorities, by the French police forces.

The Shoah Memorial acquired 5 contact sheets, retracing the locations of the so-called “Green Ticket” roundup – on May 14, 1941 – from two specialist collectors. These plates acquired by the Memorial, numbered from 182 to 187 – plate 185 is missing – represent 98 photos.

The photographer’s five films bring a reality very different from the only photos distributed by the collaborationist press. For the first time, the scene of the arrest is immortalized from several angles as well as the protagonists of the roundup. Until then dehumanized by propaganda, or even completely erased from the reports, the families of the rounded up are portrayed in the emotion of their farewells, under the eyes of curious people and neighbors.

Above all, this discovery, essential to history and to the duty of memory, allows us to follow the path traveled by these men that were rounded up, from their arrival at the Japy gymnasium, place of the mousetrap, until their internment in the Loiret camps.

WHAT THE PHOTOGRAPHS SHOW

The 98 photographs, printed in contact sheets, allow us to follow the progress of the roundup in all these stages and over time.

– Théodor Dannecker (1913-1945), represents Eichmann in France, and head of section IV J of the Gestapo, in charge of the Jewish question

THE ROUNDUP OF THE “GREEN TICKET”: FIRST ROUNDUP OF JEWS IN FRANCE DURING WWII

The Roundup of the “Green Ticket” constitutes the first mass arrest of Jews in Paris, on Wednesday May 14, 1941. Totally unsuspecting, these men, mainly foreigners coming from Eastern Europe, are summoned on Wednesday morning by the Prefecture of Police via a “green ticket”, for “examination of the situation” and asked to be accompanied by a relative or a friend.

These men, many fathers of families, who volunteered at the start of the war and therefore fought for France, expected their situation to be under control. Fleeing anti-Semitism and the persecutions of their native country – Poland, USSR, Romania, Czechoslovakia – thinking to find refuge in the land of freedoms, they are arrested above all because they are Jews and foreigners.

Several convocation centers are indicated on the “green tickets”: with the name and arrondissement,  the Napoléon barracks (4th ), the Minimes barracks (3rd), 52 rue Edouard Pailleron (19th ), 33 rue de la Grange-aux-belles (10th ) and the Japy gymnasium (11th) as well as other centers in the district police stations and in the Parisian suburbs.

For the Japy gymnasium, 1,061 Jews were summoned at 7 am; 800 responded to this summon. When they arrived, they were checked and held inside the gymnasium. The escort is responsible for going to the home of the arrested person and to return with a suitcase containing personal effects.

Then, the 3,700 Jews arrested were taken to the Austerlitz station in special buses, supervised by French police officers and then interned in the camps of Pithiviers and Beaune-la-Rolande (Loiret). They remained there for more than a year and then were deported directly to the Auschwitz-Birkenau camp by convoys on the 4 of June 25, 1942, 5 of June 28, 1942 and 6 of July 17, 1942.

During the Vel d’Hiv Roundup of July 16 and 17, 1942, it was the turn of the men families to be arrested and detained in these same camps before their deportation to the Auschwitz-Birkenau camp, between July and September 1942.