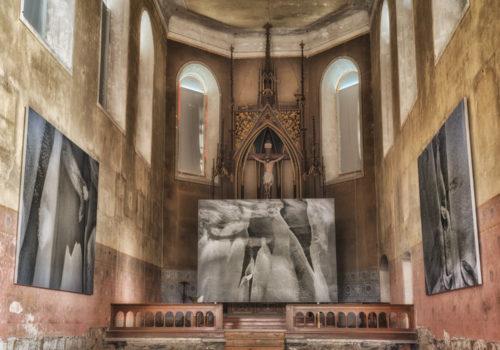 The place
Originally a hospice of the Order of St. John, built in 1218, the small church in the middle of Feldkirch’s historic centre is now, after a chequered history, home to an extraordinary exhibition space for contemporary art.

The relics of the past range from the Romanesque foundation walls to the Baroque frescoes and the New Gothic high altar.

It is easy to get close to this place, as the church stands on a prominent square in the middle of the city. Nevertheless, many people do not look behind the façade, where one of the most exciting artistic dreams of the region is hidden. Anyone who steps over the threshold of the church from the hustle and bustle of Marktgasse is immediately captivated by the silence, the light and the dimensions of the space. Gradually, one’s gaze wanders to the fragments of earlier times. Like an open book, they tell the story of many centuries. What makes this room special are the typical elements of a church, but especially the floor, which is open after archaeological excavations. This combination of abundance and barrenness is a unique venture for contemporary art. Anyone who gets involved is inevitably on the trail of the place.

The Work
Timeless compositions of the Namib Desert from a bird’s eye view. The Liechtenstein photographer Roland Blum focuses his camera lens on the structures and forms of the fascinating landscape in southwest Africa.

Roland Blum presents eight large-format photographs (4m x 3m) in the church interior and one motif in the sacristy of the Johanniterkirche. The picture compositions of the oldest desert in the world were taken from a helicopter.

2000 km long and 150 km wide, the Namib Desert covers an area of 270,000 km2. For almost five years, Roland Blum has been drawn again and again to the bizarre desert landscape of the remote northern Namib and its coast, where the desert is bordered by the Atlantic Ocean and where the cold Benguela Current meets the land. Almost every morning, dense fog settles over the desert here, caused by the rapid cooling of the sea air at night. Roland Blum flies directly along the edge of the fog with his telephoto lens: “The longer I spend with this landscape, the more I experience its diversity. Small animals that survive due to the moisture of the fog or dunes that look like snow one day and like zebras the next. Various semi-precious stones and crystals reflect in the sunlight and give the sand a special colour palette. Depending on the light situation and angle, it looks different every time. A barren mountain can suddenly glow purple. The colours of a dune can change from milky yellow to the kitschiest pink.”

Before Roland Blum starts taking photographs, he takes a lot of time to build up a relationship with the landscape. Usually this happens with long walks, if possible especially at night. During the day, he studies the light, which plays an elementary role in his work. His timeless photographic works are very reminiscent of painting. Roland Blum could perhaps best be described as a painter of light, and painting with light is photography in the truest sense of the word.

The artist
Roland Blum (born 1966 in Grabs in Liechtenstein) lives and works in Schaan. He studied music at the Jazz School and the Conservatory in Lucerne. His main works are abstract aerial photographs. They have won prizes at various international competitions and can currently be seen at the Venice Biennale in the Namibian pavilion.