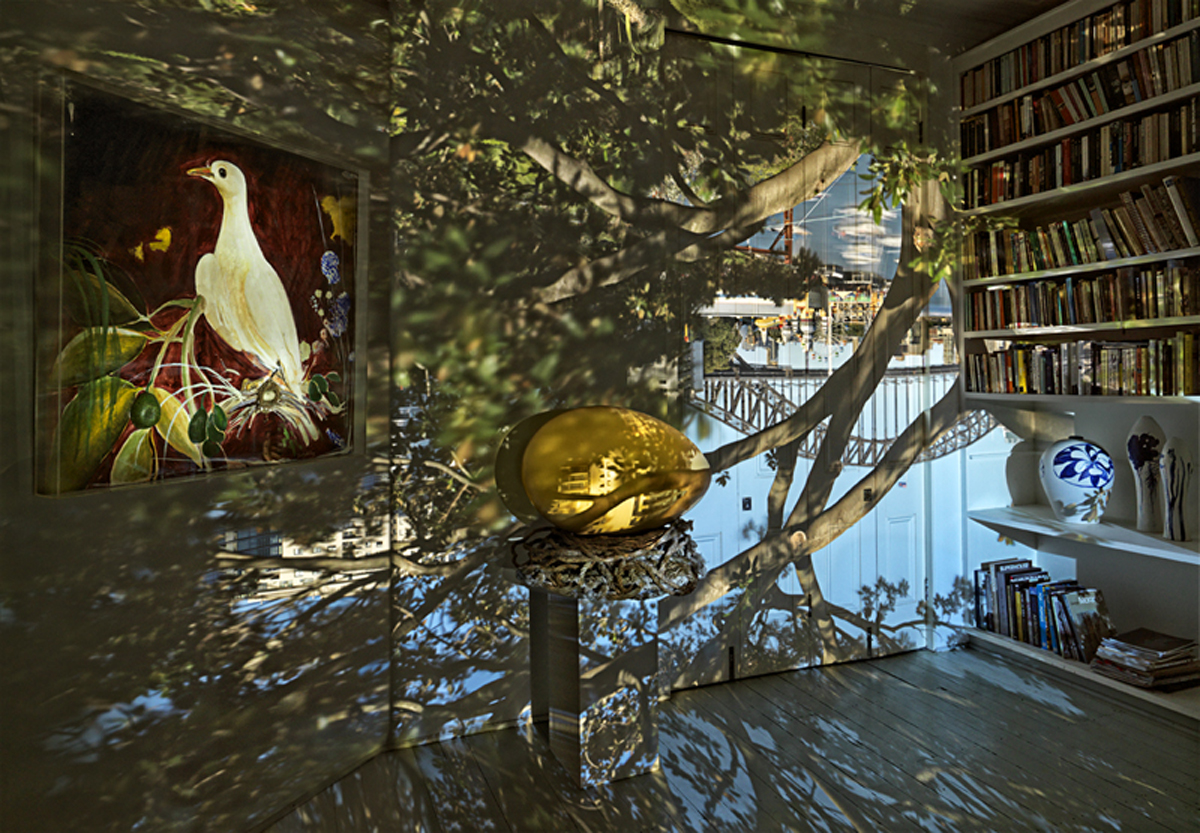 In 2013 Australian photographic artist Robyn Stacey was the artist-in-residence at the Sofitel Melbourne. For three weeks she lived at the five-star Collins Street address known for its sweeping views of Melbourne and deliberated on how she was going to make a series of photographs that went beyond the picture postcard image of the hotel.

“I was looking at the view and thought – what if I could bring the view into the room?” says Stacey.“Then I started thinking about the transient nature of hotels, where guests pass through and that idea led me to the camera obscura, which is transient too as the image only lasts for a very short time. So the technique of making the photograph, the purpose of the room and the guest experience all came together to create a synergy and when that happens it’s wonderful.”

To create the camera obscura Stacey painstakingly masked the windows of the hotel room leaving space only for a ray of light to pass through. This allowed the outside view to come inside projecting itself upside down and in reverse,temporarily painting the room with a dreamlike image where buildings and clouds floated across every surface including the hotel guest. Stacey then photographed the projection.

This is the magic of camera obscura, an ancient way of seeing the world that predates photography by centuries. Artists such as Venetian painter Canaletto, as well as philosophers dating back to Aristotle have used it.

Stacey’s fascination with camera obscura or the ‘magic mirror of life’ as it is also known, has seen her expand the Sofitel series ‘Guest Relations’, to create her latest body of work, ‘Dark Wonder’, yet another name for camera obscura.

Having ironed out the technical idiosyncrasies of photographing such an ephemeral image, Stacey has been more ambitious with ‘Dark Wonder’ which explores artists’ spaces such as Brett Whiteley’s Lavender Bay residence and Hans Heysen’s studio at Cedars. In both these images the camera obscura seems to capture the essence of these artists’distinctive styles; in the Whiteley image you can see the harbour bridge and the distortion of trees as the image spreads itself across fixed surfaces. With Heysen’s studio it is uncanny how the gum trees projected by the camera obscura evoke notes of the artist’s own paintings.

“People are fascinated by artists spaces,” says Stacey. “They expect to feel the presence of the artists and immerse themselves in that aura. The space stands in for the artist and I became really interested in working with that as the subject matter. The artist space is different to the hotel environment. Often it’s a working, living and socialising space, so it is much more potent.”

In ‘Dark Wonder’the allure for Stacey is the camera obscura’s relationship with the interior space, the design and the architecture of the room. “With this combination you get this transient in-between space that I find really interesting”.

An acclaimed artist herself, Stacey came to photography in the mid-1980s and has always been drawn to experimentation. Her earliest works featured composite images created from multiple negatives, hand-coloured and then reshot, reminding us that manipulation of imagery is not just the province of the digital era.

The exhibition ‘Dark Wonder’ features large-scale prints as well as a room sized camera obscura, creating a world of illusion that visitors can immerse themselves in. “In this space you are in the world, but you’re cut off from it. You know what’s happening around you, but it’s all upside down and in reverse. It’s like being in your own private movie”.

Avanguard red and green. From “Blow theory” to “Kontact”