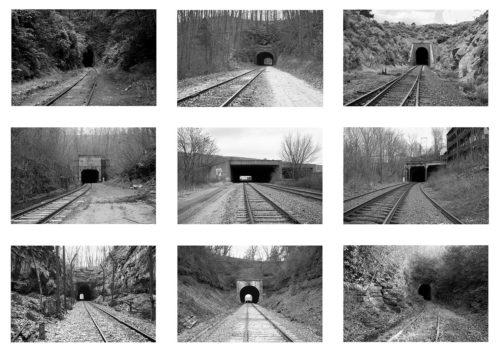 Practicing what the artist terms “visual anthropology,” Brouws, over the past thirty years, has persistently pursued a body of work that examines the evolving American landscape through its myriad cultural and industrial artifacts. Taking inspiration from the “anonymous sculpture” studies of Hilla and Bernd Becher, the New Topographics Movement, the deadpan artist books of Ed Ruscha—and with these latest series the topographic surveys of the 19th Century—Brouws has produced visual archives focused mainly on architectural and landscape forms that forge his own photographic territory. Without romanticizing his subject matter, the photographs ask us to consider the historic, economic or social forces that have shaped our built environment—from its initial development to its eventual demise to its rebirth.

Begun in 2019, Brouws’ Railroad Tunnel series’, is not only an homage to U.S. Geological Survey photographers Carleton Watkins and A J. Russell (both of whom photographed the construction of the transcontinental railroads), but also reflects the artist’s life-long interest in the railroad landscape and its environs. As railroad networks expanded and then contracted during the 20th century—due to redundancies, mergers, loss of manufacturing, outsourcing and globalization—rail lines across the United States either remained active, became moribund, or were abandoned. Brouws’s photographs reflect these transitional states, with the tunnels acting as physical examples of “history and technology embedded in the landscape.” That history, like the rails themselves, also speaks to the labor of countless workers who toiled to build them, many dug by hand before dynamite and TNT came into common use. To document these often hidden and out-of-the-way earthworks of the Industrial Age, Brouws utilized contemporary mapping technology, researching the locations online and through Google Earth satellite imagery before venturing into the field.

Similarly, but more aligned with the Becher’s “anonymous sculpture” modalities, Brouws has spent the last decade assembling a collection of electrical substation photographs, exploring their varied, yet recognizable structural forms as “readymade” or “found” pieces of unintended industrial sculpture. Anticipating that the rise of wind and solar power will necessitate a reinvention of the grid, these substations will also be rebuilt, torn down or abandoned. As with the tunnels, Brouws uses photography in this capacity as both an aesthetic tool and mechanism for preserving history, recording for posterity the infrastructure that is essential to our everyday life but goes mostly unnoticed.