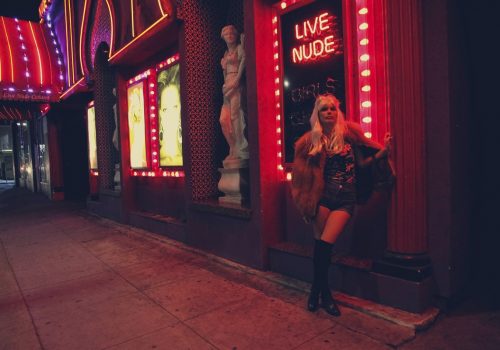 Preview
In the second release of the on going project of ‘The Neon Series’, photographer Robert Lang follows up an on going project documenting the Neon lights of Los Angeles accompanied by a  short film and photos.
The photo series is a voyeuristic envision of a night out of a misfit who wanders the neon lit night scene of the Sunset Strip, East Hollywood and Downtown LA  looking for a sign in the dark but she sees the light.
With original music from Jasmine ‘Petit Joueur’, the lyrics describe the events of the night with a beat inspired by LA native band ‘The Doors’. “Is it a dream? She is compelled to follow the neon lights, she goes to nothingness. She isn’t sure of her destination. She is lost, she’s like L.A”
The series will follow with three more short films and photo series on the the tragedy of fame in Hollywood.
The short film Jasmine “Petit Joueur” viewed here on vimeo here
https://vimeo.com/314626593
The first photos series followed ‘Belladonna’ depicting a dream state of West Hollywood and the undertone of urban decay and of how sinister it can be.
I am always interested in the odd balls and weirdos of Los Angeles and one day, when looking for a apartment to rent in West Hollywood, this creature was sat on the couch with a scraggly peroxide wig, unintentionally smeared makeup taping her pleather boot heel repeatedly on the floor while puffing hard on a cigarette, only known as the enigma Natale. I was intrigued by her but could only find a fake Facebook account of her.
Fascinated by her, I  created a story line on what she would do on a night out in LA and where she would go.
A short film “Belladona” can be viewed on Vimeo.
https://vimeo.com/203638815
http://www.robertlangphoto.com
www.instagram.com/robertlangrulz

Arles 2022 : Anne Clergue – Knight of the Order of Arts and Letters