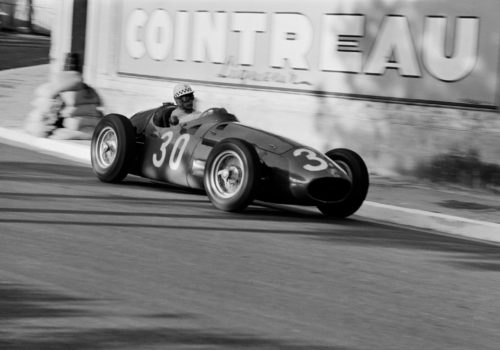 In honor of the recent passing of photographer Jesse Alexander, Robert Klein Gallery presents an exhibition of some of the most iconic race photographs created by the photographer in the golden age of motor sports.

As a young man, California-raised photographer Jesse Alexander sailed to Europe with his wife and child to photograph the crème de la crème of car races. The intimate style in which he shot the races, cars, and people of the industry set him apart and sealed his reputation as one of the most well-known and respected racing photographers of all time.

“1953 was when the whole thing began for me, and it was clear I loved cars. Another love of mine was photography. So with these two passions, the choice seemed obvious to marry the two.”

In the wake of World War II, a golden age of motor sports emerged in Europe, pitting competing countries against each other on the racetrack instead of the battlefield.

A young photographer at the time, Jesse Alexander followed “the circus” and captured on film the adventure, glamour and innocence of this influential period in racing.

“As a young boy growing up during World War II, I was captivated by the imagery that came out of the war through the eyes of legendary photographers like Edward Steichen and W. Eugene Smith,” said Alexander. “My other heroes include Henri Cartier Bresson, Jacques Lartigue, Mary Ellen Mark, Bruce Davidson, and Robert Capa.”

Alexander combined his love of photography and the photographers who captured the War with his early interest in cars and racing—fortuitously his two interests converged in a long career dedicated to shooting races like La Carrera Panamericana, Le Mans, and Mille Miglia. He dug deeper than just the glamour associated with the sport to showcase a more human side of racing—exhausted drivers, the crews working hard on the cars, and drivers accepting hard-earned awards.

Since then, Jesse Alexander has remained one of the most acclaimed and commercially successful race car photographers in the history of the sport. Jesse Alexander’s photographs have been exhibited in numerous museums and galleries in the United States, including the Birmingham Museum of Art, the Akron Art Museum, and the Santa Barbara Museum of Art.