Robert Frank as a young artist 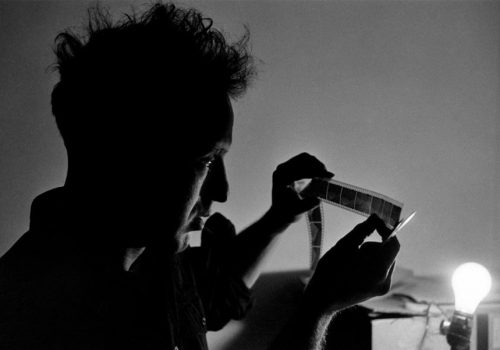 In June 2019, the SFMoMA published the short documentary Robert Frank as a young artist, shot in 2015, four years before his death. Robert Frank revisits his young years, coming to America to make himself a name as a photographer, The constant need to photograph to be a witness of his new country. He also recalls his friendship with the Beat Generation artists, like Allen Ginsberg.

Robert Frank began studying photography in Swizterland in 1941. He spent the next six years working for commercial photography and graphic design studios in Zurich, Geneva, and Basel. In 1947 he traveled to the United States, where Alexey Brodovitch hired him to make fashion photographs for Harper’s Bazaar. He mostly shot with a 35-millimeter Leica for fashion work, something quite unusual at this time. He resigned a few months after he was hired. Between 1950 and 1955, he worked freelance producing photojournalism and advertising photographs for LIFE, Look, Charm, Vogue, and others.  It was Walker Evans who suggested that he apply for the Guggenheim Fellowship, which allowed him to travel throughout the country in 1955 and 1956 and make the photographs that would result in his most famous book, The Americans, first published in France as Les Américains in 1957. The Americans was one of the most revolutionary volumes in the history of photography.

“I would live amongst them, and I would be influenced by that attitude and that wish to be accepted for what they were, not to compromise. That was the word, not to compromise. Where I came from, Europe, there was no such thing. You did what you were supposed to do. You would find a place, and get married and that was all. Here they wanted to have a different life. They wanted to live in this culture but be different. And that was a worthwhile goal to have here. To be here but to be different.”

The works of Robert Franks are represented by the Holden Luntz Gallery. This video was shared as part of the gallery’s program Meet our Artist.