Robert Doisneau, a photographer at the Museum 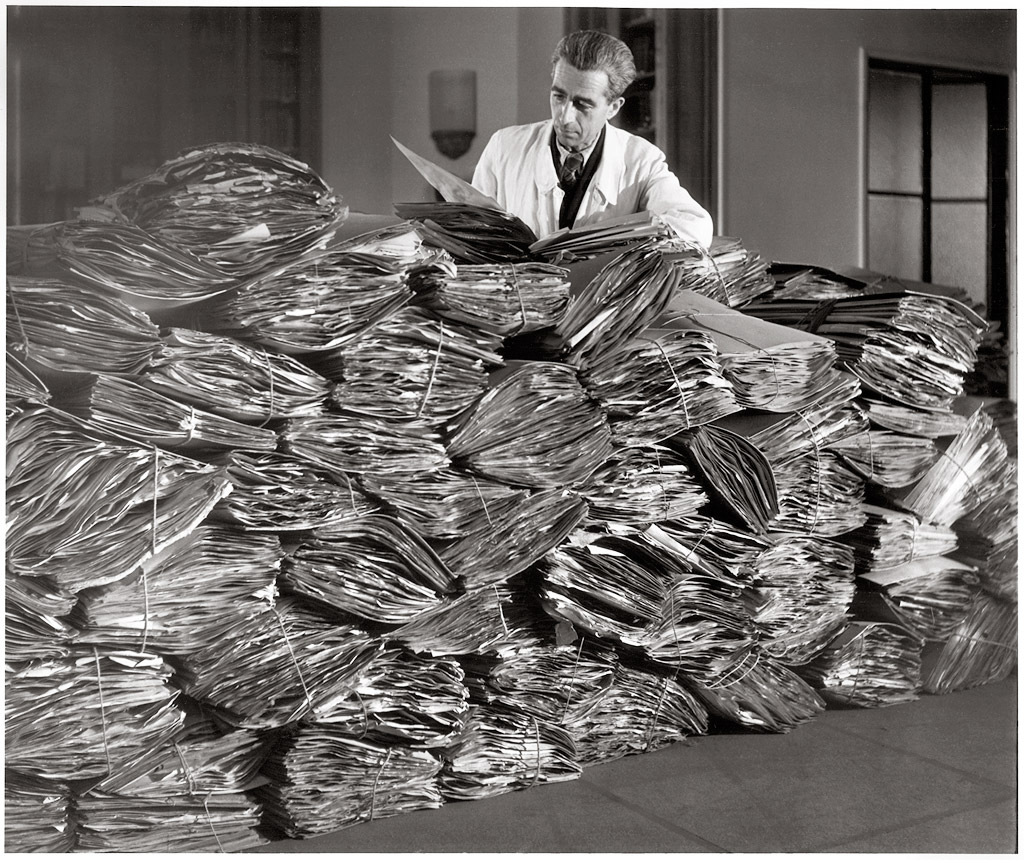 Robert Doisneau covered the Muséum national d’Histoire naturelle of Paris (National Museum of Natural History) on 2 occasions. First in 1942-1943 and then in 1990. More than a hundred images from this coverage, in majority conserved in the Doisneau fund collection of the Muséum library, are unveiled to the public for the first time in an exhibition presented in the great gallery of evolution until January 18 th, 2016. For this occasion, a catalogue has been published by Flammarion.
Today we present  a selection of images and  texts of Francine Deroudille, Robert Doisneau’s daughter.

Robert Doisneau, a photographer at the Museum
by Francine Deroudille

1942, Maximilien Vox, famous typographer and publisher, hires a young 30 year old photographer, Robert Doisneau, to do a story on the great French scientists.

Doisneau pushes the doors of the Muséum and discovers a world apart that he looks on with amused fascination. He produced, from 1942 to 1943, a very complete long term coverage in that great establishment.

Photos of the Muséum, that is to say also the Parc Zoologique de Paris and the Musée de l’Homme since they belong to  the same establishment, were undoubtedly intended for the edition of a book entitled “Faces of Science”, that will never see the light.

Doisneau methodically catalogues his negatives in his studio, produces about 150 18 x 24 prints which were delivered to  the Muséum, where they will be conserved with perfect care, and the case was then closed.

In 1990, Robert Doisneau’s nephew, Alain Foucault, Professor Emeritus at the Muséum invited him to return to the site and evoke his memories of 1942-1943 for a new itinerary in this prestigious place.

A ‘Science of Doisneau’ exhibition is presented in March 1990, mixing certain images of his previous works  to his fresh coverage of the Museum.

Robert Doisneau was my father.

I did not tell you this right away because I missed the beginning of the story for a very simple reason: I was not born yet. So I can give you no personal anecdote on this “hunt for researchers” that he led in the rue Buffon in those severe years when Paris was occupied.

I arrived on earth in 1947 when the coverage was finished and mostly forgotten.

My father,  died in 1994. This is my only reproach, as his presence was precious to all who frequented him.

He himself missed the end of the story.

At the turn of the years 2010, the original prints of the coverage were found in the archives of the Muséum, and my sister Annette Doisneau and I were offered to consider an exhibition born from this collection.

Two years of work in the company of an exceptional team, and principally Alice Lemaire, responsible for the collections of the central library of the Museum, helped to carry out a tight investigation that today brings to life the story of 130 of these prints.