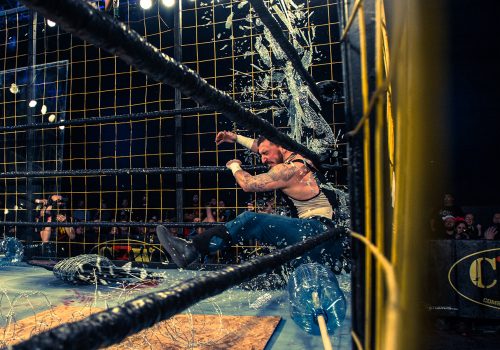 This body of work looks at the world of independent professional wrestling, an extreme type of physical story telling that mixes soap opera storylines with choreographed stage fighting. Events shown range from small shows in bars and clubs to large-scale productions in arenas. A portion of the project looks at death match wrestling: an ultra-violent form of the sport where wrestlers perform brutal blood laden matches with weapons. These contests feature barbed wire bats, thumbtacks, fluorescent light tubes, and flaming tables. Much like ancient human sacrifices, wrestling has always economised a desire within people to view and enjoy the suffering of others. While making this body of work I was interested in using photography to deconstruct the performance and spectacle of wrestling. I want the work to hint at wrestling itself as a performance of the political and ideological divisions that are prevalent in contemporary American politics.

Before making work about professional wrestling, I spent several years documenting boxers  in inner city gyms in Belfast city and later in East Flatbush, Brooklyn. I was drawn to the brutal circumstance fighters would train in. Crooked noses, black eyes and cauliflower ears where clear indicators of the physical toll it takes to be a fighter. To succeed, they had to accept suffering, which is very much the nature of life itself. The work I made with these boxers was an important experience that set me up for wrestling. I felt a kind of purity and naive connection to truth when I photographed boxing. This would not be the case when I entered the world of professional wrestling.

“The virtue of all-in wrestling is that it is the spectacle of excess.” 1.” Roland Barthes,

In an employee hallway inside a Hyatt Regency hotel in Orlando, Florida I waited for hardcore wrestler Matt Tremont to return from the ring. I remember feeling flustered because it was the first time I had ever seen a death match. Matt had being thrown through a wooden table wrapped in barbed wire and covered in broken glass. He had been slammed on a canvas full of thumbtacks. His face had grotesquely contorted as he howled to the crowd while his opponent Penta stuck a fork deep within his forehead. The fans loved it. When he came through the curtain he sat on a chair, calmly pulled off his wrist tape and spoke into a television camera while I photographed him.

“And when I say boom, A cloud of smoke,

A furious smell of gas, Fire and barbed wire, No ropes,

A Death Match in the US. If I die in that ring

My dream will become a reality, And I’ll die with a smile

In the aftermath of what I considered (at the time) the most violent event I had ever witnessed, Matt spoke articulately and with menace. Like a poet he kept a slow and deliberate cadence, which created a menacing momentum. He crescendoed his performance by dropping to his knees and screaming the name of his next opponent, ONITA! The Shakespearian like monologue ended, the camera ceased recording and I stopped taking pictures. Matt thanked everybody and asked if they could check if any children were in the hallway outside, because he didn’t want to scare them with his blood soaked face. The contradiction of Matt Tremont from a violent wrestler to a soft-spoken and considerate man was baffling. It was the first time I really considered how complex the performance of wrestling was, and I was inspired to use photography to really explore what it all meant on a deeper level.

“But what wrestling is above all meant to portray is a purely moral concept: that of justice.3” Roland Barthes, Mythologies 1957

Wrestling, at its core is a passion play about suffering, redemption and defeat. It has always elevated contemporary societal issues to mythical levels through its characters and storylines. For example, in the early 1980’s the all American Hulk Hogan feuded and defeated the wicked Iranian Iron Sheik.

Another example would be Sargent Slaughter, a US army drill instructor who feuded with Nikolai Volkoff, a villainous Russian (who was actually from Croatia.) In the time of Barthes Mythologies wrestling was much less conceptually developed; simply pitting a good guy against a bad guy. What I found when I started making work on the subject is that those parameters no longer exist, and that wrestling pushes the envelope further than ever in order to appease its fans. Wrestling incorporates constant reference to pop culture. There are writing teams that develop storylines that play out over months and even years. Characters operate on varying levels of complexity and often adjust their performances in response to the audience’s behavior. This ability to read and adapt to the needs of the audience requires advanced tools of manipulation and a skilled understanding of psychology. I was interested in seeing if an exploration of this could reference contemporary issues in a visual way.

The world itself had gone through cataclysmic shifts of the status quo in the time I began making this work. Brexit acted as the entrée to Trumps Presidential victory. Trump, (who has made numerous wrestling appearances) has all the characteristics of an exemplary villain (or “heel” in wrestling terms.) His presidential campaign used all the techniques of a seasoned rogue wrestler who can easily manipulate an audience into acting how he or she wants them to. Throughout this project I was interested in exploring the transmutation of the wrestlers, from ordinary people into Gods and Demigods. This kind of dramatic transformation can be linked to that of Trumps sudden rise to power. Instead of wrestling mimicking politics the politics now felt more like they belong inside the world of wrestling. There are now no rules for what is good, bad, real and fake. With this in mind and wrestling’s original connection to moral justice I want the work to act as a hyper real metaphor for the deep ideological divisions that have demolished the status quo.

I had looked into the theme of suffering throughout my earlier boxing work, but it felt much more significant linking it to the world of wrestling. Barthes stated, “Wrestling presents man’s suffering with all the amplification of tragic masks4.” What I found interesting was that the portrayal of suffering in modern wrestling has proliferated significantly since the time of his writing. The wrestlers were acting out pain, but their blood and wounds were real. This fusion of truth and fiction is complicated and multi layered. One of the most common phrases I would hear from viewers of the work is “That’s fake.” That response in itself is important for me because it allows viewers to get lost in the contradictions of the work.

Because of the parallels wrestling has to religion and iconography I also started looking at renaissance paintings. I drew particular inspiration from “Brugels “Fall of Icarus,” and “Fall of the Rebel Angels,” which both feature themes of vice and virtue. To take my work out of the “straight documentary” realm I stopped shooting as much traditional portraiture and limited my use of flash. I began framing my pictures in a more complex manner, sometimes from right above the wrestlers who were lying on the floor “selling” their injuries to fans. My intention was to add dimension to the visual language I had already created and to connect viewers to the Hyper Reality that is wrestling. Wrestling, at its core presents a spectacular reproduction of society that may give answers to current cultural phenomenons.

“The spectator does not wish for the actual suffering of the contestant; he only enjoys the perfection of an iconography. It is not true that wrestling is a sadistic spectacle: it is only an intelligible spectacle.5”

It is interesting considering this Barthes quote about the spectator in 2018. At times it felt that the fans had a genuine bloodlust and wished for real pain to be inflicted on the wrestlers. Some fans would bring weapons for the wrestlers to use on their opponents. Sociologists Abercrombie and Longhurst described wrestling as “the aestheticization of everyday life6.” Considering this phrase in relation to my pictures and the change in fan behaviour it is telling of the precarious state the western world finds itself in in 2018.

Wrestling is a never-ending travelling road show, with special attraction matches, star power and specific events that our set up to culminate feuds. I photographed wrestling events throughout New York, New Jersey, Philadelphia, Delaware and Florida. With a book project always being my main focus I decided that a more succinct way to present the work would be through a series of short themed photo books that were made to house certain motifs or events that were significant. For example one book specifically shows bodies lying on the floor, which explores the idea of performing sufferance.

Another book is a study of the spectacle and transmutation of wrestlers from ordinary men into Gods. This does so by showing only mid air photographs of wrestlers performing high risk moves. The function of the shorter books is to allow viewers to dip in and out of each world I am trying to show and relates to the episodic nature of wrestling. By isolating subject matter I intend to slow the viewer down and to give more consideration to each image.

Wrestling can be progressive, transgressive or regressive depending on where the show is.  It is paradoxical in nature and permits multiple reads. I hope that my work can also operate in this way. There are some audiences who will look at it purely to enjoy images of action. Others may find intrigue in the grotesqueness of the blood while some will read into bodies strewn on top of each other on the floor. Whatever conclusions viewers may come to I hope that the work is engaging on both a visual  and conceptual level.