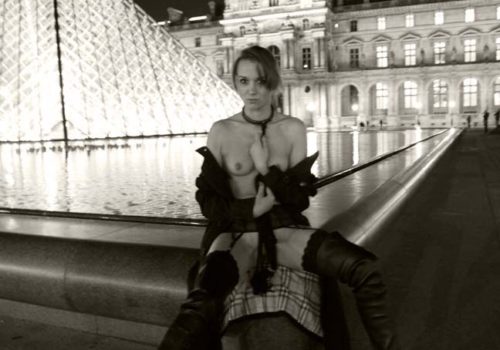 Renée Jacobs‘ pictures have a combination of intensity and honesty that I don’t often encounter … She’s making the pictures because she wants to keep them fixed in her head and heart for all time. Her models trust her to tell the truth about them. And she does. That “truth” is of course half hers, a half that is rich in admiration and affection. For their part, the models are free to be what they choose for the time of the picture – . I feel distinctly privileged to present this work to you as a singular example of what can be achieved with photography when the passion behind the camera is far greater than photography itself.

This is what I love.
Jock Sturges, from the introduction to Werkdruck

This is a book about Paris, about passion, and about pleasure … Jacobs’ depiction of femininity is both an ancien! and a modern one of women of free spirit- as free as any man … Like Romaine Brooks, Jacobs presents format elegance, desire, and beauty all coupled within the allure of sexual magic … The joy sings through Jacobs’ lens.
Professor John Wood, from the introduction to René Jacobs’ Paris

Jacobs was born in Philadelphia, Pennsylvania and started her photo career as a photojournalist freelancing for newspapers and magazines. Her first book, Slow Burn: A Photodocument of Centralia, Pennsylvania, was published in 1986 and re-issued by Penn State University Press in 2010. She took a detour to practice civil rights and constitutional law for 15 years, returning to photography in 2006. When she was 9 years old, someone asked her if she was from Paris because of her name. “Why yes!”, she replied. She, of course, is not. She is American. But perhaps the fact that her American parents gave her a French name, complete with accent, sparked her lifelong fascination with the City of Light. Photographing women in Paris over the last few years has been the perfect blending of Jacobs’ erotic message about the sexual power of women and an homage to the city where everything sensual seems possible.
Jacobs is the recipient of the prestigious International Photography Award (Lucies) for Fine Art Nude Photography and her images have been published around the world in such publications as Taschen’s New Erotic Photography, Fine Art Photo Magazine, Silvershotz, Adore Noir, PH Magazine, and most recently, in her solo monograph, Werkdruck, published by Galerie Vevais in Berlin, edited and with an introduction by Jock Sturges.