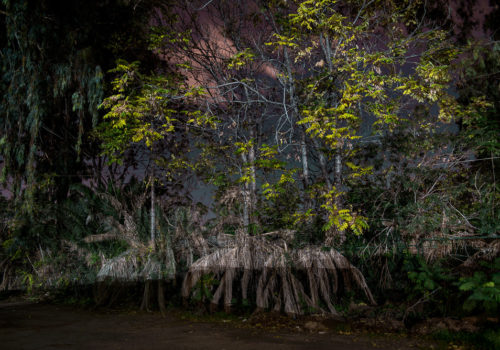 Along the banks of the River Kifissos in Athens, there was once a great Olive Grove that was preserved intact until the 1880s, according to the map drawn by German cartographer, Johann Kaupert. Among 170.000 trees that have been mapped, there is also recorded perhaps the first industrial building of the area – a tannery. The siting of the heavy industry along the length of the river in the 19th century and the extreme urban expansion of the 20th century put an end to this immense garden, marveled by historians & travelers alike. Nowadays only urban weeds & invasive trees grow there. Large trucks plow the dirt roads, delivering their products to the warehouses and factories. Any traces left of the past topography are lost under the dust and in the noisiness of day. At night, however, the scene is transformed. The distant horizon fades and from the darkness emerge shadows of old and new lush greenery, of stone warehouses and small islets of residence amidst the unruly industrial landscape.

rolling around at nights

praying on an ancient river

turn this land to a home

turn this home to earth

Guard the remembrance of the soil

Skin it from the light.

Johann August Kaupert (1822 – 1899) German topographer and cartographer born and educated in Kassel. In 1875 and 1877, Kaupert worked with archeologist Ernst Curtius in Greece on behalf of the Deutsches Archäologisches Institut. He conducted topographical investigations of Athens and its surrounding areas and he collaborated with Curtius on the creation of Atlas von Athen and the acclaimed Karten von Attika.

The geo-historical map drawn by French cartographer Jean-Denis Barbie du Bocage for the book Atlas of Barthélemy, which was meant to navigate Young Anacharsis, an imaginary descended from the famous philosopher Anacharsis, through his travels in Greece. Anacharsis the Scythian, a philosopher who travelled to Athens in 589 BC, was respected and regarded as a Greek sage, but in his homeland of Scythia was killed as a traitor for introducing new cults. Parts of this book were translated into Greek by Rigas Velestinlis. Velestinlis used this map by Barbie du Bocage for the Chart of Greece, published in Vienna in 1797, on the eve of the Greek revolution for independence.

Credit for the map: The Travel Accounts Book Digital Collection of Onassis Library.

Plan of Environs of Athens for the Travels of Anacharsis the Younger in Greece by Abbé Jean-Jacques. Barthélemy, published 1788.

‘…the formation of 512 (Army) Field Survey Company RE in December 1939. That company’s founding members were a mixture of regular soldiers, reservists, militiamen and others ‘called-up’ on the outbreak of war…During the winter of 1940/41 the war spread to Greece when, in October, the Italians stormed across the border. However, the defending Greeks in a short but bloody campaign then repulsed them. On the 8th of February 1941, fearing a further attack but this time by the Germans, the Greek government asked Great Britain for military assistance. As the Italians were now defeated in North Africa it was decided to send support across the Mediterranean Sea… Thus, at the end of March 1941, Colonel Martin Hotine, recently returned to Egypt from East Africa, was appointed Deputy Director (DD) Survey and sent to Piraeus in Greece to organize the Survey support to the campaign… He found himself with a particularly difficult task as the only maps of Greece available to the War Office at the outbreak of war were in most cases out of date and great difficulty was experienced in obtaining copies of the latest maps from the Greek authorities. When up to date maps were eventually received it was found that the text was printed in Greek characters and therefore had to be transliterated into Roman characters before new maps could be prepared… The military situation deteriorated so rapidly that the British soon faced withdrawal from the Greek mainland and so 512 Company’s Mobile Echelon packed up for evacuation on the 23rd of April 1941. However, the German advance was so rapid that many of its personnel, together with a large portion of 9 Field Survey Depot, the Topographic Sections of 517 Company and part of the Survey Directorate were captured and became prisoners of war…’