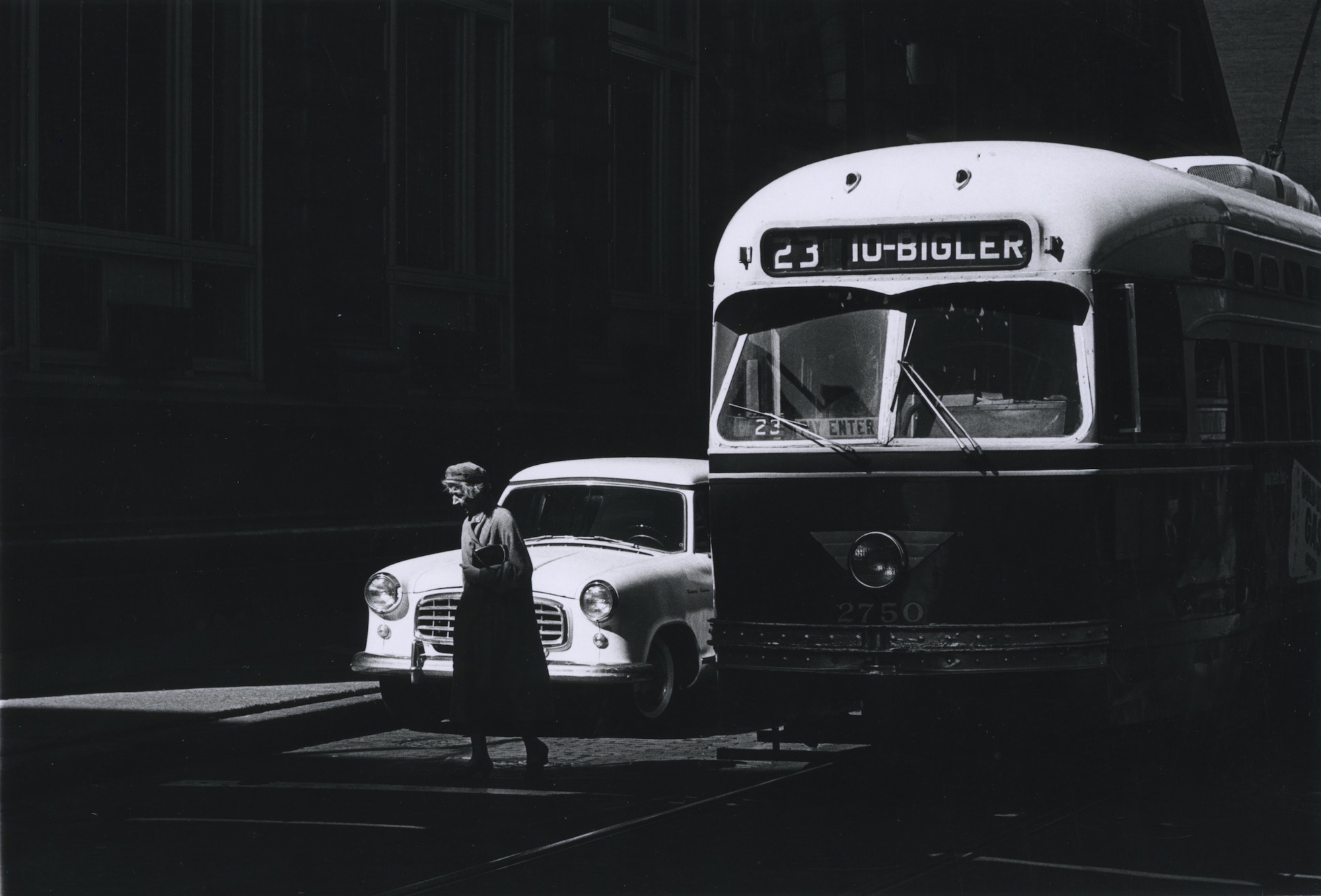 There are a good numbers of living photographers whose careers span more than a half- century but not many whose art shows as much  vitality as that of the American photographer Ray K. Metzker. Few of his peers can match his visual acuity, and capacity for renewal. Rare is the photographer who can strike as skillful a balance between formal brilliance and a tender perception of the world; rare, too, is the rigorous formalist who can also entertain – as Metzker does with his visual puns, puzzles, and occasional pyrotechnics.

The photographer’s subject matter is widely varied but, considered retrospectively, its diverse threads coalesce into a coherent tapestry. One of the lengthiest threads in this richly woven fabric is the modern American city, with its morose inhabitants scurrying through dark canyons stabbed by shards of light.

Today, looking back at the past fifty years of his photography, Metzker is struck by the centrality of “the street” in his work: first as a springboard for a successful career, then irregularly over the years as a rich mine of imagery (and is the photographer himself not another “city driller”?). Metzker believes he will never exhaust its possibilities. Looking back, he is also surprised to see how often he has focused on actual street surfaces, with nothing other than their much – abused asphalt, paint markings, and puddles with their reflections as his subject matter. “The street is the stage for much human interaction” he notes. “First, I am looking down at it all, closely…and then I move the camera up and focus on what is moving along, the flow of men and women, appearing, disappearing, pulsating…”

Many accomplished photographers, having achieved a mature-style, are then content to stick with the tried-and-true, at the risk of a certain staleness. What rewards the eye in Metzker’s work, year after year, decade after decade, is the constant visual and conceptual refreshment. He obviously delights in pushing himself and his medium, forward.

Anyone familiar with American photography will feel the spirit of Harry Callahan in Metzker’s work. Although the influence itself is clear, Metzker’s own explanation of it is nuanced. During their time together as teacher and student at Chicago’s Institute of Design, Metzker recalls, “Harry never showed any of his own photographs”. Nor did Callahan give technical advice. It was what went unsaid that was to have a great impact on Metzker: “the idea that you could do it on your own, follow your own vision, make real art”. It’s true that a number of Callahan images are remarkably similar in feel to Metzker’s, but the latter insists he had not seen them at the time, and indeed, Metzker’s images sometimes predate similar ones of Callahan’s.

Metzker delights in darkroom experimentation. His negative is only the halfway point of the journey. It’s the positive print that counts, and although the negatives that will lead the print have been taken with meticulous care, they are but raw material in the dark room. He sees the camera itself as “a vacuum cleaner, sucking up every detail in the frame”. Sometimes he finds something unexpected in the image, and works to bring that out; at other times, he suppresses details. The material may “prove unwillingling”, or may simply not live up to the original encounter. Metzker is sometimes amazed that an extraordinary picture may emerge from a negative he’d virtually written off at first glance. And then, if he is observant, “something jumps, glows, flutters… and we pluck a few threads from reality and weave them into another reality, perhaps producing a package of wonder, formed of light and silver, with poetical and mysterial charms.”

Metzker’s open-mindedness also explains why certain works are given two widely separated dates: 1964-2007, for example. In such instances, the photographer had exposed a batch of negatives decades ago but had never gotten around to doing anything with them. This may have been either because he was simply too busy with other things, or because he didn’t quite know what to do with them. So, although the “seeds” may appear to have lain dormant all these years, in fact the period has been one of slow gestation. Metzker has always been content to let things grow organically. Unlike most photographers who are driven by the here-and-now Metzker has taken the long view, and his patience has paid off. Rarely has a photographer’s œuvre achieved comparable richness and depth.

Wordsworth once wrote of “the still, sad music of humanity” – a particularly apt description of Metzker’s city folk. Indeed, music is a useful metaphor for Metzker’s photography. Many other observers have heard echoes of music in Metzker’s work, not least the artist himself, who has admitted, “music is my muse”.

Conversely, silence is another useful concept in dealing with Metzker’s work. The dark surfaces, stabbed with light, are not necessarily about emptiness: light needs darkness, as sound needs silence. “Without silence”, Metzker has said, “we cannot really hear the subject that needs attention. Uncontrolled sound or noise drowns out the message and, in equivalent visual terms, overwhelms beauty. Successful form implies control, balance, and the filtering out of what the photographer disdains as “the excessive traffic of the obvious.”