Raghu Rai : Travels in the moment 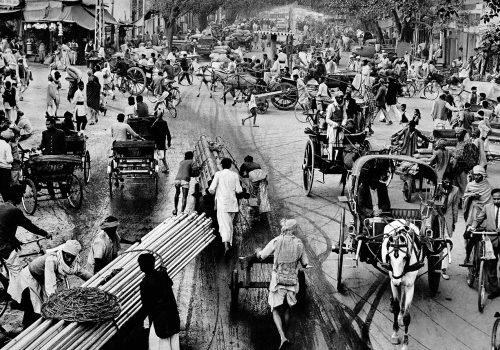 Born in 1942, in Jhang (British India – present-day Pakistan), Raghu Rai became a photographer at the age of 23. The following year, he joined the staff of The Statesman newspaper as chief photographer (1966 to 1976) and at the same time served as editor-in-chief of the photo service of Sunday’s weekly news magazine. Calcutta (1977-1980).

In 1971, following his exhibition at the Delpire Gallery in Paris on the Bengali refugees from Pakistan, Henri Cartier Bresson offered him to join Magnum Photos, to which he is still associated today.

In 1982, he became director of photography for India Today magazine, India’s leading news magazine. He has contributed to special issues, contributing to innovative photographic essays on social, political and cultural issues of the decade (1982 to 1991).

For the past eighteen years, Raghu Rai has exclusively devoted his work to India. He is the author of about fifty books dedicated to the events and figures of his country: Delhi, the Sikhs, Calcutta, the Taj Mahal, Mother Teresa … His in-depth report on the Bhopal disaster in 1984 as part of a mission from Greenpeace International resulted in a book and a series of three exhibitions between 2002 and 2005.

Numerous exhibitions have been devoted to him all over the world, including, in particular, retrospectives at the Rencontres de la photographie in Arles in 2007, at the National Gallery of Modern Art in New Delhi in 2008 or at the Aicon Gallery in London. in 2011.

He received the Padma Shree in 1972, one of India’s highest civilian honors, for all of his work on the Bangladesh war of liberation and the refugees. In 1992, he was named “Photographer of the Year” by the United States for his work on “Human Wildlife Management in India,” published in National Geographic magazine. In 2009, he was appointed Officer of Arts and Letters by the French government. In 2018, he received the Lucie Award for Photojournalism from the Lucie Foundation in New York.

His photographic reports have been published in numerous magazines and newspapers around the world. In 2012, he created the Raghu Rai Center for Photography, a place of sharing and teaching photography among younger generations.

Raghu Rai currently lives in New Delhi and is working on his 57th book.

Le Prix de Photographie de l’Académie des beaux-arts – William Klein was established in 2019 by the Academy of Fine Arts with the support of the Chengdu Contemporary Image Museum, a tribute to the work of William Klein, photographer, painter , visual artist, graphic designer, director of documentary, advertising and fiction films.

Consecration award, this award is intended to reward a photographer for all of his career and his commitment to photography. It rewards a photographer, of any nationality and any age. Endowed with 120,000 euros, this prize is awarded every two years, alternating with the Marc Ladreit de Lacharrière award in partnership with the Academy of Fine Arts and is accompanied by an exhibition at the Palais de l’Institut of France.

L’Académie des beaux-arts is one of the five academies that make up the Institut de France. It encourages artistic creation in all its forms of expression through the organization of competitions, the awarding of prizes every year, the funding of artists’ residencies, the awarding of grants, and the defense of French cultural heritage. Today, the Academy includes 63 members and 63 correspondents in nine artistic sections.